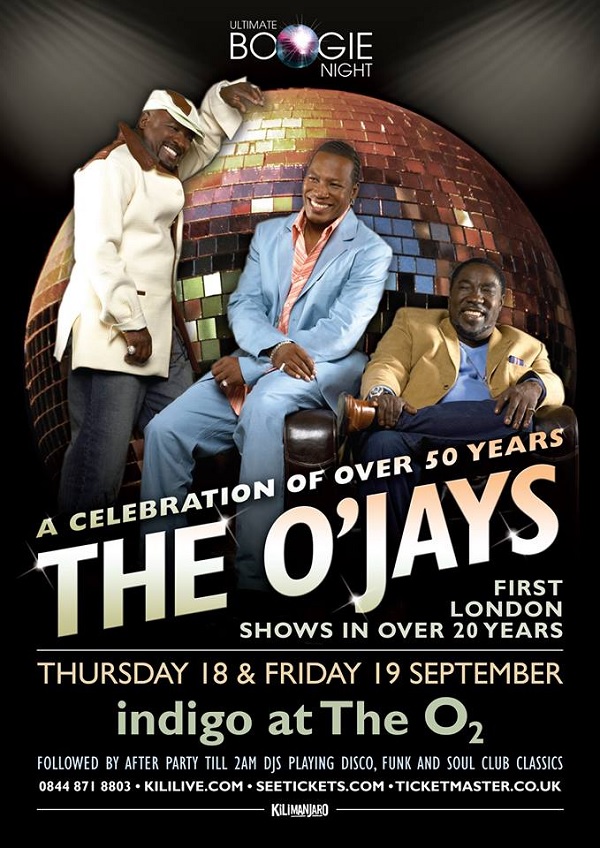 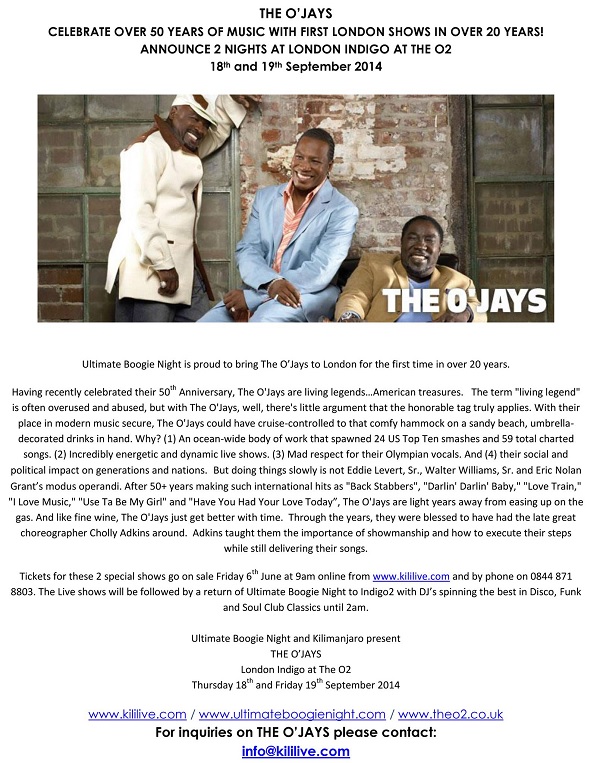 The O’Jays is one of the world’s truly legendary singing groups and an American treasure. The term legendary is often overused, but that is an apt description for The O’Jays, a musical act that holds a unique place in the history of music. After establishing a recording history that includes an international body of work that generated 24 top ten smash records and 59 total songs on the charts, incredibly energetic and dynamic live shows.

Respect for their Olympian vocals and a social and political impact that spans many generations and multiple nations, The O’Jays could have coasted to a life of sandy beaches, umbrella-decorated drinks and total relaxation. Slowing down is not in the cards for Eddie Levert, Sr., Walter Williams, Sr. and Eric Nolan Grant however. After 50+ years making such international hits as “Back Stabbers,” “For The Love Of Money,” “Darlin’ Darlin’ Baby,” “Love Train,” “I Love Music,” “Use Ta Be My Girl” and “Have You Had Your Love Today,” The O’Jays are light years away from easing up on the gas.

Like fine wine, The O’Jays just get better with age. Drawing on their past experiences and remembering the lessons taught by legends such as the late great choreographer Cholly Adkins, who taught the members of the group the importance of showmanship and how to execute their steps while still delivering their songs, the members of the O’Jays are more active than ever. There have been “four faces” of The O’Jays. The vocal group was formed in Canton, Ohio by Eddie Levert, Sr., Walter Williams, Sr., William Powell, Bobby Massey and Bill Isles. The group was named after Cleveland DJ Eddie O’Jay. Bill Isles left the group in 1965 and Bobby Massey left in 1971 to become a record producer, leaving Eddie Levert, Walter Williams and William Powell to continue as a trio.

When William Powell was forced to retire in 1975 due to illness (unfortunately passing in 1977 at the age of 35) Sammy Strain, formerly with Little Anthony and the Imperials, joined the group. Levert, Williams and Strain moved forward as The O’Jays until 1993 when Strain returned to his former group and was replaced by Nathaniel Best. Best left the group in 1995 and Eddie Levert and Walter Williams approached Eric Nolan Grant, a gifted vocalist who was already a part of the group’s extended Cleveland-based musical family. With Eric Nolan Grant on board, the group released the chart-topping album “Love You To Tears.” According to Eddie Levert, “Eric was the ideal person for the O’Jays, because he was used to working within a group. He was really a shoe-in, and he fit perfectly.

With his addition, we have been able to keep our performances at a level that we’re used to having-stage-wise and in the studio.” From Eric’s perspective, “Honestly speaking, being from Cleveland, the O’Jays were our heroes.” “We all looked up to the O’Jays and patterned ourselves after them. So, Gerald called me to say they were holding auditions and I got the gig. Sometimes, I’ll get caught up to where I’m on stage, and I’m watching Eddie and Walt like I’m in the audience! Every now and then, Eddie and Walt has to come over to me and say, `Hey, sing!’ After all these years of being in the group, I am still a fan.” Eddie Levert, Sr., Walter Williams Sr., and Eric Nolan Grant have been together since 1995 and continue to dazzle fans today. The stage is where The O’Jays let it all out and they continue to perform throughout the United States and internationally. The group blows away the competition with its soulful sound and always plays to “standing room” only audiences.

The O’Jays remain on the road several months during each year, and still enjoy the accolades and rave reviews of fans and media worldwide. Each new generations falls in love with The O’Jays, which is why their “For The Love” album, (released in 2001), was a chart-topper, and in 2002, that album was nominated for a Grammy Award. The O’Jays continue to receive numerous awards from various shows and organizations, while still making guest appearances. Says Walter Williams, Sr., “We have three generations at our concerts: the kids, the moms and dads, and the grandmas and granddads.” Eddie Levert, Sr., Walter Williams, Sr., Eric Nolan Grant…The O’Jays…have proven time and time again that the mixture of “ol’ school” and contemporary music is a winning formula…a formula which always reflects the O’Jays uncompromising stance on love and relationships. After many years of continued success, The O’Jays have become a complete media sensation. In addition to their musical endeavors, The O‘Jays have branched out into acting and writing. In September 2003, they appeared in their debut film “The Fighting Temptations” starring Cuba Gooding, Jr., and Beyonce Knowles as well as artists that included Angie Stone, L’il Zane, Melba Moore, and Montell Jordan. In 2004 the group recorded their latest album Imagination under the Music World label. That same year, The O’Jays were inducted into the Vocal Group Hall of Fame in Sharon, Pennsylvania. A year later, on March 14, 2005, The O’Jays were inducted into The Rock and Roll Hall of Fame in Cleveland, Ohio.

Due to their history and reputation, The O’Jays continue to receive attention from all over. Their hit song “For the Love Of Money” became the theme song for the hit reality TV show “The Apprentice”, starring Donald Trump, and the group performed the song live at the taping of the show’s first season finale. In 2006, the O’Jays performed at the ESPY awards, hosted by Lance Armstrong. In 2009, The O’Jays were awarded BET’s ‘Lifetime Achievement Award’. Due to Eddie and Walter’s lifelong relationship, a bond exists that keeps them and the group in good stead and only strengthens their business relationship. The two met when Walter was 6 and Eddie was 7. They admit they had to grow on each other because as they say “they were like two wild bulls when they first became friends”. Now, “After many years we appreciate our friendship, our dedication to each other and the group and our love for good music.” Walter continues: “We probably could have had great solo careers, but I don’t think either one of us could have ever have been as big as The O’Jays”. Both Eddie and Walter enthusiastically say, “The O’Jays are our main love, and we never intend to leave that”.

The O’Jays are still going strong, currently performing at concerts around the world. Throughout their career The O’Jays have achieved 10 Gold Albums with 9 going Platinum and have recorded 10 #1 hits. It’s been a long journey but thanks to the fans, the LOVE TRAIN is still going strong!