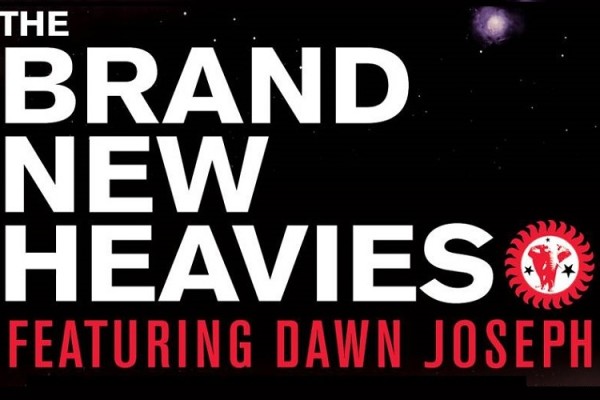 Perform at the Jazz Cafe Camden with support from 9th-12th December. 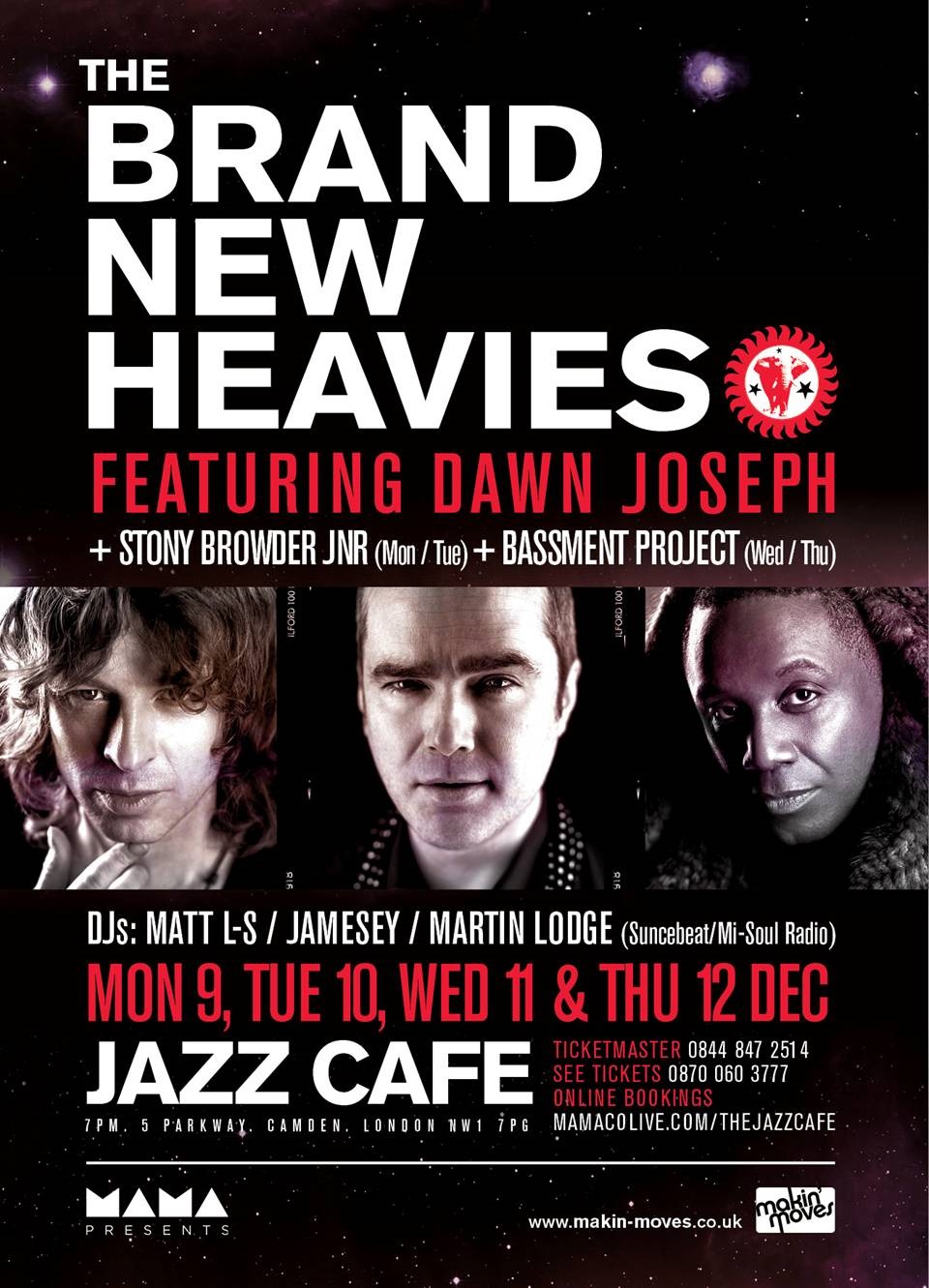 Pioneers of the London Acid Jazz scene, The Brand New Heavies, are a British music institution whose unique mix of jazz, funk and soul has lit up the UK music scene for well over two decades. In the wake of the 25th anniversary of Acid Jazz (the label that signed ‘The Heavies’ in 1990), 2013 sees the release of their first full studio album in nearly seven years: ‘Forward’, featuring original vocal collaborator N’ Dea Davenport and introducing new vocalist Dawn Joseph.

Over the years The Brand New Heavies have been responsible for some of the UK’s biggest R & B/ soul tracks, scoring 16 top 40 singles including ‘Dream On Dreamer’ and ‘You’ve Got A Friend’, as well as over two million album sales.

Ever present founder members Jan Kincaid, Simon Bartholomew and Andrew Levy (on drums/keyboards, guitar and bass respectively) conceived the band in the London suburb of Ealing in 1985, and they became influential in creating what became known as the acid jazz scene of the early 90’s. Acid Jazz was the slower-paced, more soulful counterpart of acid house that also spawned the likes of Jamiroquai and Galliano.

The band’s name was homage to soul godfather James Brown, who was once billed as the ‘Minister of New Super Heavy Funk’. ‘We supported him at Wembley once,’ guitarist Bartholomew later revealed. ‘We were sound checking and James Brown arrives…dressed in this amazing olive green suit with a sort of Kentucky Fried Chicken tie. And we jammed in front of him. He was like “you guys sound great”. It was mind-blowing for us because he basically invented funk.’

The Heavies first made their reputation on the late 80’s London club circuit. A debut single, ‘Got To Give’, came out on Cooltempo before the band signed to Acid Jazz Records and released ‘Brand New Heavies’ in 1990, with the emphasis on instrumental rather than vocal material. In America, where they were signed to the Delicious Vinyl label, they started getting press attention. Jan Kincaid recalls ‘a live show in New York which also got great press. Word got back to the UK and suddenly there was this massive buzz … From then on, the public and press perception really took off for us.’

This Stateside connection had grown even stronger when they linked with American singer N’Dea Davenport. Having made her name in Los Angeles, where she’d headed with $300 in her pocket after leaving her native Atlanta, she continued her travels to London after Eurythmic Dave Stewart offered her a solo record deal. She didn’t take this up, instead linking with the Heavies, and the band’s first golden period was about to begin.

Their eponymous debut album, re-issued with Davenport’s vocals, took off around the world in 1992, fuelled by the hits ‘Never Stop’ (a new track), ‘Stay This Way’ and ‘Dream Come True’.

Just when you would have thought they’d capitalise on this first success, the Heavies then took a stylistic left turn and came up with ‘Heavy Rhyme Experience: Vol. 1’, joining forces with a number of popular rappers including Main Source, Gang Starr, Grand Puba and the Pharcyde. The inspiration had been a show with MC Serch (of 3rd Bass) and Q-Tip of A Tribe Called Quest in New York which had inspired them to incorporate elements of hip-hop in their music.

Two years later came the album many fans still consider their peak. ‘Brother Sister’ included the hits ‘Dream On Dreamer’, ‘Back To Love’ and ‘Spend Some Time’ and soared all the way to Number 4 in the UK chart, turning platinum in the process. It also contained their biggest chart single to date, the Number 13 smash ‘Midnight At The Oasis’. This cover of the 1974 Maria Muldaur hit became a UK radio staple but was never released Stateside.

Davenport’s departure in 1994 to complete a long-delayed solo album didn’t derail the Heavies. Their next vocal collaborator was Siedah Garrett, a long-time associate of Quincy Jones, who had recently recorded and toured with Michael Jackson, duetting with him for ‘I Just Can’t Stop Loving You’ and co-writing ‘Man In The Mirror’.

As part of the band, Garrett co-wrote their Top 20 hit ‘Sometimes’, which peaked at Number 11 in the UK and helped propel the next album, ‘Shelter’, to No. 5. But, as with ‘Midnight At The Oasis’, it was when the Heavies lent their trademark sound to a well-chosen standard, in this case Carole King’s ‘You’ve Got A Friend’ that the biggest commercial rewards were obtained. Originally a US chart-topper for James Taylor and performed by its writer a quarter of a century earlier on her ‘Tapestry’ album, it made UK No. 9 in the Heavies’ hands and was all over the radio airwaves.

Good friend Carleen Anderson of Young Disciples fame, picked up where Garrett left off soon afterwards, happily contributing to ‘Trunk Funk – The Best of The Brand New Heavies’. Her revamped version of ‘Apparently Nothing’ (a hit for her previous group in 1991) joined ‘Saturday Nite’ as Top 40 singles that helped boost the collection to an impressive Number 13 peak.

After a short hiatus the group re-emerged in 2006 with a new album called ‘Get Used To It’, prompting esteemed US trade paper Billboard to proclaim Davenport ‘one of the seven wonders of the world… she doesn’t just sing lyrics…she inhabits them.’

A few side projects later and 2013 sees The Heavies re- emerge in triumphant and refreshed form with original collaborator N’Dea kicking things off in spectacular style on the single ‘Sunlight’, out April 15th 2013. Davenport features on several tracks on the “Forward” album with new British vocalist, Dawn Joseph taking up the baton on several tracks also, alongside Kincaid on vocals and some of their signature funk- filled instrumentals. The Brand New Heavies have been ploughing their own furrow in the British music scene for over a quarter of a century and are respected the world over. With their new album and tour dates, both in the UK and abroad in the off-ing, they look set to continue that tradition for many years to come.

“Forward” is released on HeavyTone Recordings on 29th April 2013.