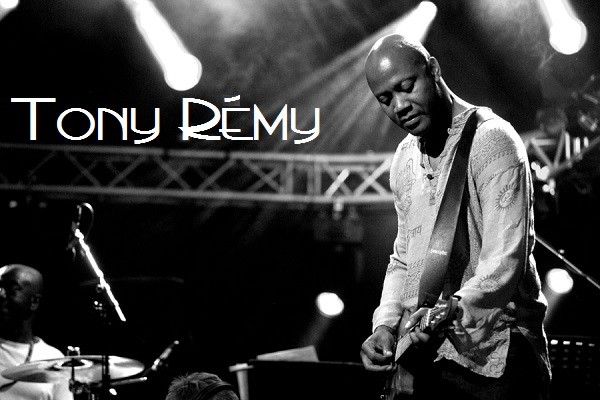 TONY REMY is one of the world’s most exciting guitar players of any genre. His hard-edged rhythmically driven approach is enriched with jazz intuition and bluesy soul. Live on stage, his relentless invention and incredible raw energy can set the crowd on fire.The reputation he has gained within the jazz community worldwide is fast making a legend out of this North London musician.

Tony started his professional music career in 1986, although he was on the Jazz scene earlier. He recalls: “I had a band called “Cube 60” in ’84 with Winston Clifford, Joe Bashorun and Nick Cohen. We were crazy about Miles Davis, Weather Report, Steps, The Brecker Brothers, so we were writing and playing that stuff. I also had a rock band called “Secretary Bailey”.
Then in ’85, “Cube 60” developed into “Desperately Seeking Fusion” with Frank Tontoh, Jason Rebello and Julian Crampton. That was really my first outing as bandleader”.

Tony played with THE NDR BIG BAND featuring PEE WEE ELLIS. Another band that Tony involved with is STONE SOUP “contains nuts” featuring KCB from US3, JULIAN CRAMPTON, GEOFF WILKINSON and TONY REMY. Tony is a musical director for DON BLACKMAN and RAHSAAN PATTERSON. Tony Remy has been working with PP ARNOLD and is also producing a record for her. Tony’s movie credits include writing scores for “PASSION OF REMEMBERANCE” (1986), “LOOKING FOR LANGSTON” (1989) both by ISSAC JULIAN, “CAREER GIRLS” (1997) by MIKE LEIGH (co-written with actress MARIANNE JEAN BAPTISTE) and two short films for the thames festival produced by FLARE FILMS. Tony recorded an album with BOB FRANCESCHINI in december of 2006 .

Tony’s new album “FIRST PROTOCOL”, has been released in february 2007. To check the page go to www.myspace.com/tonyremyfirstprotocol. Album is available on import only in the UK. European and US releases TBA. If you wish to order this album click here.

To view and buy Tony’s other albums go to www.alltone.co.uk.

Tony has just competed production on TONY MOMRELLE’s new album MESSAGE IN THE MUSIC and is producing an album for KAREN RAMIREZ. He is currently working on some recordings for IVE MENDES as well as finishing another TONY REMY album. CHECK OUT OTHER GREAT PROJECTS TONY’S CURRENTLY INVOLVED WITH, – IT’S A EUROPEAN FUSION BAND STREETNOISE – Urbanjazz AND A NEW TRACK IN COLLABORATION WITH THE GRAPE RECORDS “THE BASS LINE”.