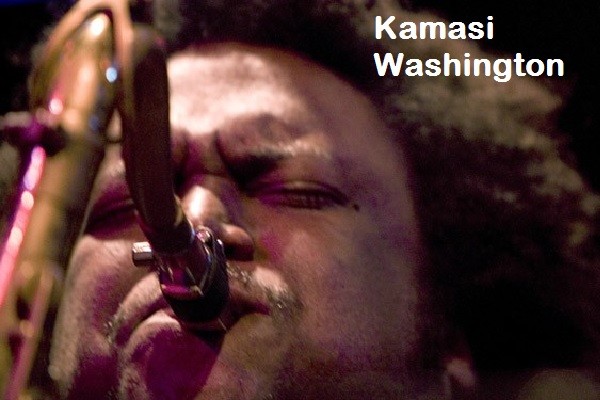 At the age of 13 Kamasi Washington decided to begin a life long quest of the many wonders to be found in music. He made this decision one night when after a rehearsal at his home his father left his soprano saxophone lying on the piano and left Kamasi with an uncontrollable curiosity of all the beauty he’d just heard come from it. So he took father’s horn, and even though he didn’t know anything about the saxophone, in fact he’d never even touched a saxophone, and played Wayne Shorter’s “Sleeping Dancer Sleep On”, his favorite song at the time. Kamasi was shocked he had been playing drums, piano, and clarinet for years but he’d never played the saxophone. Yet he was somehow able to play a song from his heart and in that received an early glimpse of the euphoria that music can bring. And at that moment he knew that music was his life’s quest and the saxophone was his voice.
Within two years Kamasi earned the lead tenor saxophone chair in the top jazz ensemble at the prestigious Hamilton High School Music Academy. At the same time Kamasi joined the Multi School Jazz Band (MSJB) where he was reunited with several child hood friends who were well on their way on their own musical quest. During his senior year of high school Kamasi formed his first band with childhood friends Ronald and Stephen Bruner on drums and bass, along with pianist Cameron Graves. The group was called “The Young Jazz Giants”. After high school Kamasi went on to study ethnomusicology at UCLA were he received a full scholarship and was exposed to many of the non-western musical cultures around the world. In the summer after his freshman year Kamasi recorded his first album with “The Young Jazz Giants” a platform they used to spread the new sound of jazz all around the country. In his second year at UCLA Kamasi went on his first national tour with the west coast hip-hop legend Snoop Dog. Ironically this band was made of many of the most talented young jazz musicians in the country. Later that year Kamasi joined The Gerald Wilson orchestra. Gerald Wilson was his biggest hero compositionally and being a part of his orchestra motivated him to make composition the focus of his major at UCLA. In doing so Kamasi began studying many of the great American and European composers.
After his senior year at UCLA Kamasi went on his first international tour with RnB legend Raphael Saadiq who had ¾ of “The Young Jazz Giants” in his band. Later that year he was given the honor of representing Gerald Wilson’s Los Angeles band on his album “In My Time” witch featured Wilson’s New York based orchestra. Over the next few years Kamasi was blessed to be able to perform and record with many of his musical heroes, from many different genres. He played with legendary jazz artist such as McCoy Tyner, Freddie Hubbard, Kenny Burrell, and George Duke. At the same time he was working with artist such as Lauryn Hill, Jeffrey Osborne, Mos Def, and Quincy Jones. During this same time Kamasi started his new band called “The Next Step”, a kind of modern spin on a big band, with two drummers, two bassist upright and electric, piano and keyboards, three horns and a vocalist.
Recently Kamasi has been touring with legendary musicians Stanley Clarke, Harvey Mason, and Chaka Khan. He’s featured on Harvey Mason’s latest album “Chameleon” and will be featured on Stanley Clarke’s upcoming album as well. Kamasi also has a ground breaking new album coming out on the record label “Brainfeeder” with his band “The Next Step”. It’s a triple disc masterpiece appropriately titled “The Epic”.