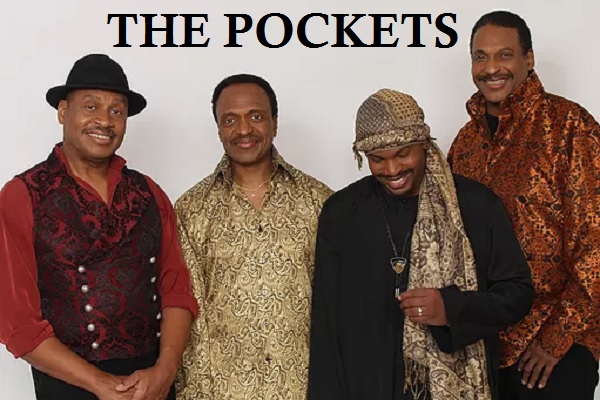 Our Featured Artists will be

A Baltimore based funk R&B group was born and the dynamics of the three piece horn section, the vocalizing of Larry Jacobs and the grooves from the rhythm section brought forth more than just something to pat your foot too.  This was a style of music years ahead of its time and now with the 6 orignal members ready to make an incredibel comeback be on the look out for something new, special and exciting!.

Pockets successfully released three LPs on Columbia/Kalimba productions entitled “Come Go With Me”, “Take It On Up”, and “So Delicious” which included various tours throughout next 4 years that followed.  Later to come differences of opinions with the business made Pockets end their relationship with the Earth, Wind & Fire bassist as the producer Verdine White.  And that caused a title wave for Mr. White to take Pockets from off of the current record label Columbia Records and Kalimba Productions.  Pockets moved back to Baltimore to regroup which didn’t happen at all.  A tradegy followed shortly afterward with Irving Madison the saxophonist being murdered in his house by a person that broke into his home.  Several years later Albert McKinney passed away by natural causes.  Pockets did not come together as members branched out to seek jobs whether musical or other types to make ends meet in order to survive.  However there where members from Pockets that continued to work and maintain themselves as professional musicians.

35 years later the idea was brought up by Gary Grainger to George Gray and others to do a reunion performance and an attempt was made after all of these years to locate Larry Jacobs who was the singer of the group.  Larry and the other remaining members where located and this is where Pockets are at the present with the plan and will power that will allow them to make a huge come back to bring their musical stylings back as fans have been asking when will they be hearing and seeing the group again.  We, as Pockets, hope to see you at our next concert very soon to come and you can finish the rest of this  story about us on your own!!!!


Awesome talent from Baltimore..love my CITY..LOVE TO HEAR THOSE HORNS BLOWIN’ from THE “POCKETS”