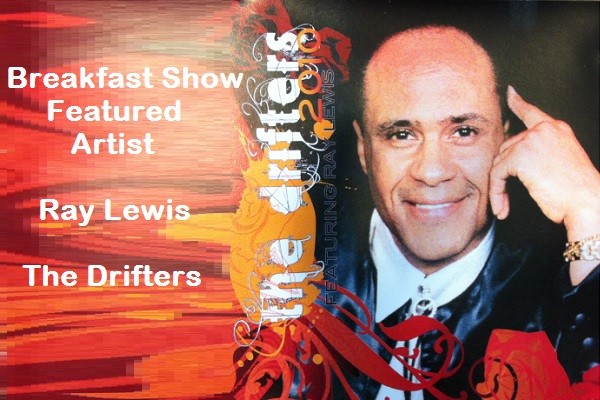 Ray Lewis ….began his early days singing in Church – with a background lodged firmly in his local Baptist Church in Cleveland, Ohio it was there he began honing his gift by singing in the Choir.
He made a decision sign up for the Military where he trained as an Engineer …. even aboard the military vessel he was always playing music so much so that his fellow ship mates would always find themselves in Ray’s department enjoying his choice of music and the obvious singing that came along with it – Ray found he simply had the passion to sing whenever and wherever he found himself.

After leaving the Military and a succession of jobs – he was invited to audition for the role of Lead Singer of The Drifters …initially due to Johnny Moore leaving the group (later returning to perform alongside Ray and the other members). The audition was successful and after signing on the dotted line so to speak – a new Drifter was born. His first role was to re-record many of The Drifters hits so as to be a recognisable voice for the group.
Ray enjoyed many many years with the group working alongside Johnny Moore, Bill Fredericks, Ben E King, Joe Blunt, Clyde Brown – to name a few.

Having become somewhat disillusioned with the group and itching to spread his wings and try new pastures as a solo artist – Ray finally left to pursue a new path. He settled in the UK – enjoyed taking time to start slowly with his solo career.
It took some time to build a new audience as people had always been accustomed to watching Ray perform with a group – adjusting to a solo performer was quite new but Ray worked tirelessly to win over those who may have thought he was ONLY a great vocalist with The Drifters and maybe couldn’t ‘cut it’ on his own ….his hard work paid off and Ray won himself a whole new fan base based simply on Ray Lewis!

Alongside his solo shows – touring extensively around the world …. He then formed a group called ‘STILL DRIFTING featuring RAY LEWIS’ in which he performs with 3 other talented vocalists and pays tribute to the hits he enjoyed with the Treadwell’s Drifters. The group pay homage to those still with us and those whom have passed away.

Ray enjoys world-wide fame thanks to his own unique voice and professional and charismatic aura.
Besides his role in the group, he is still concentrating on a solo career and has performed to sell out theatres and audiences in venues around the world, having been associated with great names like Carole King, Whitney Houston, Lionel Ritchie, Paul McCartney and Diana Ross. Without doubt, he is one of the world’s greatest entertainers and enjoys a large following.

2009 saw Ray finally step out and make the decision to record a solo album – it has taken 4 years, there have been tears and laughter, joy and some misery but after much work ‘DID YOU EVER’ was released on March 4th 2013 – a new era for Ray has followed with rave reviews following a huge round of press & media publicising the album.

This energetic and vibrant vocalist is second to none …he is now embracing a new generation and just as excited now as when he began all those years ago.