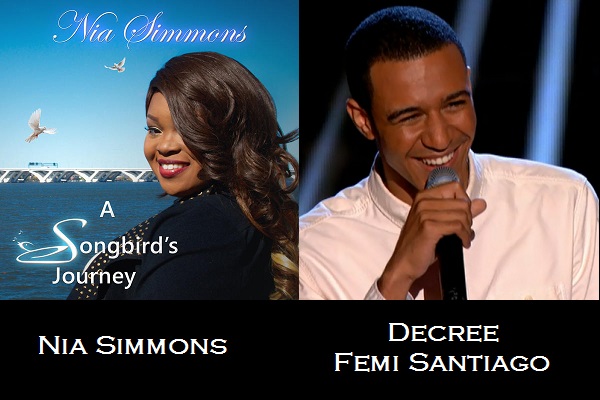 Nia Simmons is proud to be one of many artists representing the talent-filled Washington DC Metropolitan Area. Born and raised in Alexandria, VA, Nia has been singing since age 3 starting in the church, then gradually moving on to local talent competitions and community events.

Her vocal style is heavily rooted in Gospel, R&B, and Jazz. Artists such as Whitney Houston, Ella Fitzgerald, Karen Clark-Sheard and Ledisi are among her vast list of musical influences. She is a Howard University graduate; Bachelor of Music in Jazz Studies.

Nia was an original member of the premiere Howard University vocal jazz group, Afro Blue, and was featured with the group on two Howard University Jazz Ensemble recordings (2002 and 2003). She also recorded with gospel band, Anointed Favour, on their 2005 single “Advance the Kingdom”. Though she enjoys assisting her fellow artists by contributing background vocals for studio sessions and live performances, Nia is also a sought after solo artist and vocal arranger.

Currently, she is working on her debut R&B LP titled, “A Songbird’s Journey”. Nia’s journey has taken her to multiple well-known venues in the area (Kennedy Center, DAR Constitution Hall, Warner Theater, Lyric Opera House and Blues Alley to name a few), where she was privileged to share the stage with nationally and internationally-acclaimed artists. Her debut single, “Living for Today”, started a new chapter in her journey, which has gained her international recognition and acclaim. The song charted in the top 15 of the UK Soul Chart. Nia’s second single, “Used to You”, offers another sampling of this songbird’s silky, smooth vocals that will catch your ear and move your spirit.

Established electronic music producers Jon Pearn and Michael Gray – Full Intention – approached Superfried to work on the identity and sleeve for the debut EP by Femi Santiago AKA DeCree.

Femi had previously received a positive response as a contestant on The Voice in 2014. However, this was a new direction for the singer/ musician and song writer into the dance arena and consequently required a new alter ego.

Supplied with new PR shots the use of Femi’s image seemed apt to build on his existing profile, whilst also creating a new and distinctive image. The square aspect ratio of the sleeve led to the idea of symmetry/ balance and then to kaleidoscopes.

Each side of Femi’s face was duplicated, mirrored and joined to form two new, symmetrical versions. Since faces are surprisingly asymmetrical this process rendered portraits of almost two completely different people – like the two sides of one’s personality. These were then combined once again to form a complete, symmetrical and accurate likeness of Femi. This now provided the starting point for experimentation and numerous styles for future potential releases, whilst always maintaining a common thread of the artist throughout.

With a gallery of images to chose from attention was now directed focused on the identity. Here simplicity and geometry were an obvious starting point to continue the style. Breaking the letterforms down to their simplest recognisable forms led to a bold and distinct logotype which maintained a strong, legible presence overlaying imagery or in complete isolation.