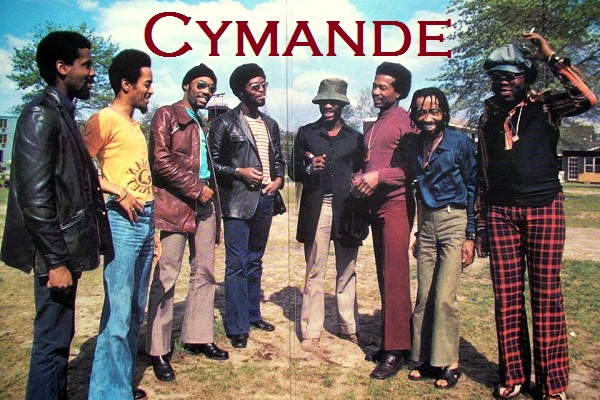 Described as “spiritual… versatile…smooth, sweet and very different”, no-one has yet to sum up the unique sound of Cymande in one simple word or phrase. Nyah-Rock, Afro-Rock, even Calypso Rock have been used to categorise their music, but Cymande is just simply Cymande. Formed over 40 years ago by Steve Scipio and Patrick Patterson, the band was made up of nine self-taught Caribbean born, London based musician/singers:

Cymande’s longevity and success has been achieved by its totally original style and exclusively self-penned songs, welding together the diverse strands of reggae and Rastafarian rhythms with funk, soul, R&B, jazz, rock, African music and West Indian folk the band grew up with. The Music of Cymande conveys a true spirit of togetherness reflected in the band’s emblem which incorporates a dove symbolizing peace and love.

In 1971 the group met John Schroeder, Cymande’s longstanding producer, in a basement club in London’s Soho, where he had gone to audition another act. The rapport was immediate, Schroeder recollecting “an atmosphere of electric excitement”, and together they became totally immersed, hour after hour from rehearsal rooms to recording studio, honing their distinctive style.

At the 1972 MIDIM Music Industry Fair in Cannes, Schroeder introduced Marvin Schlacter, President of Chess/Janus Records to two of Cymande’s recordings. This led to a request by Chess/Janus Records for enough material to fill and album, and so, the self-entitled album “Cymande” was born, becoming the fastest selling record on the Chess/Janus Record Label.

“The Message” backed by “Zion 1” was the first single to be released, and its success triggered a whirlwind of events, with Bob Schwald appointed as Cymande’s U.S. Manager. With solid airplay and a very complimentary U.S. Music Press, the band soon achieved the rare distinction of listings in all three of the key U.S. national Charts – Jazz, R&B and Pop.

Easy to listen to, easy to dance to, yet full of emotion and meaning, Cymande’s music arrived Stateside with some considerable force

An invitation to tour with Al Green followed quickly, leading to frantic rehearsals, jangled nerves, and for a band who were used to playing before crowds of up to 300 people, suddenly they were performing at giant venues across the U.S.

The Tour was a huge success, and demand grew for more material. Cymande returned to London and went straight back into the studio when the Tour ended to start work on their second album, entitled Second Time Round.

Consolidating the success and acceptance of the band in America, a second U.S. Tour followed, this time headlined by Cymande themselves, the ultimate compliment.

They made history by becoming the first British based band to perform at the world renowned Apollo Theatre in Harlem, New York.

While on Tour with their follow-up single to “The Message”, entitled “Bra” moving up the charts, the idea of recording a third album was conceived. Cymande recorded their 3rd album in Chicago at the Chess/Janus Studios, where artists such as Muddy Waters, Chuck Berry and the Rolling Stones had previously recorded.

But while the band embraced the opportunity and enjoyed the sights and sounds of Chicago, the frantic pace of their meteoric rise in the U.S. finally caught up with them.

Musically, the magic remained, yet, the tell-tale signs of tiredness, tetchiness and being away from home for long periods of time began to show.

The 3rd album, Promised Heights was released in 1974, through Contempo Records in England, where hindsight has shown that their music arrived in the U.K. long before it’s time.

Cymande’s legacy stands strong, with a large cult following both in the U.K. and the U.S.A.. They are one of the most sampled black British bands of all time. The music of Cymande heavily influenced the Rare Groove/Deep House scene of the 1980’s and sampling by Hip Hop, House and R&B music artists including De La Soul, Wi-Tang Clan, The Fugees, MC Solaar to name only a few, continues today.

Steve and Patrick have continued to write music throughout the interim period, and in 2010 they called the original core band members, their producer and sound engineer back together to explain their new vision. In 2011, reunited and with just as much enthusiasm as the first time, they began rehearsals and are now ready to release their 4th Album some 40 years after the release of their 3rd album. Not only is it a supremely fine album that captures the sound and essence of the band as it did when their music first burst onto the scene, it also fulfils the promise of this reinvention in 2014.

The core band members of Cymande from 2014 are: