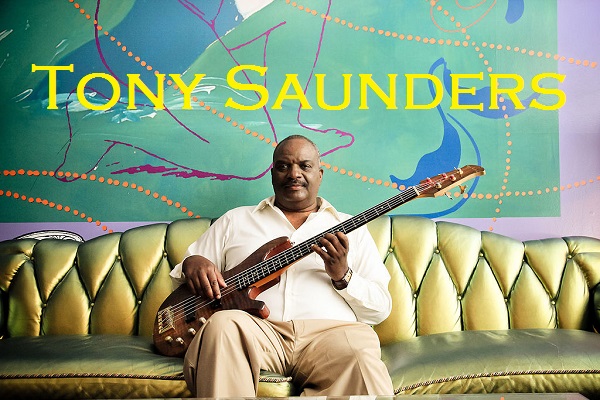 The Breakfast Show Featured Artist of the week

will be The multi talented Bassist

Saunders comes from a musical family. His world famous keyboardist father, Merl Saunders, got him started at an early age. He began singing at the age of five, and played piano from age eight. Herbie Hancock and Sly Stone were among Saunders’ early teachers, and Sly gave Saunders an organ at the age of ten. At age fourteen he began playing the bass.

In 1969, Tony’s Dad, Merl Saunders, was the Musical Director for the Joseph Dolan Tuotti musical Big Time Buck White (which featured Muhammad Ali and Donald Sutherland among others), with music and lyrics by Oscar Brown Jr..[1] During that time, Tony was the lead singer for The Man Child Singers.[2] The Man Child Singers performed and recorded the songs Right On and Mighty Whitey from that play on a 45 produced by his father’s label Summertone Records. This single was included in the compilation CD Home Schooled: The ABCs Of Kid Soul in 2007.[3] The Manchild Singers also recorded a San Francisco Giants jingle.

Tony received one of his first piano lessons from Herbie Hancock, and was awarded a fellowship at the prestigious San Francisco Conservatory of Music for piano.[4] His first Fender bass guitar was a gift from Tom Fogerty, brother of John Fogerty and rhythm guitarist for Creedence Clearwater Revival. He graduated from the Conservatory of Music in San Francisco. He received an Emmy at 14 years old with his father for the children’s special Soul Is, a PBS documentary featuring Black poetry accompanied by Tony on the bass.

At age 17 he began playing with his father and Jerry Garcia, and was a featured musician in Merl Saunders & Aunt Monk. Later Tony played in the original Rainforest Band, and recorded on all other projects of his father’s. Legendary bassists Chuck Rainey, Jack Casady and John Kahn all took interest in Saunders’s ability. John Kahn turned Saunders on to James Jamerson, and Saunders modeled his playing around all of his teachers. Other influences include Stanley Clarke, Alphonso Johnson, Rufus Reid, Ralphe Armstrong, and current favorite Marcus Miller. This has led to a very flexible and diverse style.

Saunders has scored movies, corporate videos, TV shows and commercials, and produced many CDs, primarily out of his own studio, Studio 1281. He wrote the music to the stage play Zetta, performed in San Francisco by the American Conservatory Theatre, and also assumed the role of musical director for the show. He was the musical director of Rock Justice, written by Bob Heyman and Marty Balin of Jefferson Starship.[5] Artists collaborating with him on recent projects have included Mavis Staples, John Lee Hooker and Austin “Auggie” Brown, the nephew of Michael Jackson. (Auggie’s project was sold to Midas Records.) Tony has also been a staff producer for San Francisco Records, bringing Ashling Cole to the label and producing her project. Tony has produced over 400 tracks with his core musicians Dante Taz Roberson on Drums, Bill Hampton on Guitar, and Sylvester Burks on Keyboards. Tony’s first solo CD “Bigger than Outside” was released in October 2011. It remained on the charts for 70 weeks. His new CD “Appaloosa” was released January 22, 2014. It features Tony on Bass, Grammy winners Howard Hewett, Bill Champlin and Tony Lindsay on vocals. The CD has 7 instrumentals and 6 vocal songs. Tom Politzer from Tower of Power, Rock Hendricks from Paul Hardcastle’s Jazz master series also grace the CD with their Sax playing. Longtime friends of Tony’s, Fred Ross and Sakai, background singer with Train, also sing their hearts out on the duet “The Question Is”.

Saunders has been influenced by Gospel music since he was a young child. He studied under choir director Leon Patillo. Saunders met the Hawkins family when he was 14, and credits them with not only inspiring him to play bass, but also with giving spiritual guidance to his life. He played with Walter Hawkins, Edwin Hawkins and the Love Center Choir in the 80’s, and released He Lifted Me Up, his first gospel project, in 2005. Among the other Gospel artists Saunders has played with are Andrae Crouch, the Clark Sisters, the late Reverend James Moore, Daryl Coley, James Cleveland and the Williams Brothers, The Might Clouds Of Joy and Shirley Ceaser. His most recent Gospel project features Derrick Hughes, Alfreda Lyons-Campbell, and Saunders’ longtime friend, gospel bassist/drummer Joel Smith (Walter and Ed’s nephew).

Saunders has worked with and performed on behalf of several charitable and social issue-oriented organizations including Bread And Roses, the Seva Foundation, the Rex Foundation, Rock for Hope, the Haight-Ashbury Free Clinic, and the Rainforest Action Network.