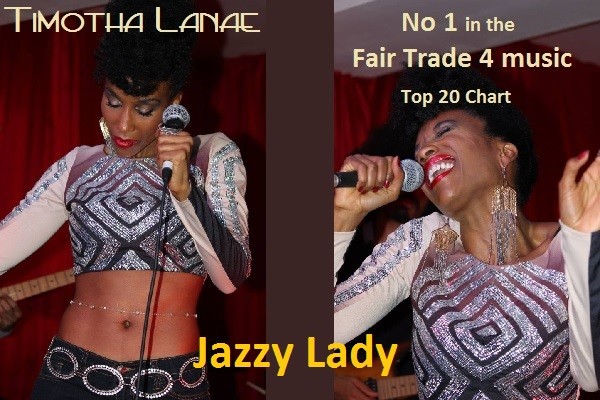 Timotha Lanae (Tuh-moth-ah Luh-nay) is an American Soul Songstress, a dynamic dancer and an award winning theatrical performer who seamlessly joins together her passion for music and theater. Her debut album RED has received critical acclaim and reached the #1 spot on the UK Soul Charts. She describes her sound best in the lyrics of Smooth Music, the first track of her album RED, “A touch of Jazz, R&B, Soul and Hip Hop too, I mix these all together to make my grooves…”

Timotha has collaborated and shared the stage with a number of world class musicians, producers and actors including Whoopi Goldberg, Brian D’Arcy James, and R&B legend Alexander O’Neal. She has performed across the globe including South America, Japan, the UK and the US, with performances at The Tokyo International Forum, the world famous Jazz Café in London, Band on the Wall in Manchester, UK, the legendary BB Kings in New York City and the historical Howard Theatre in Washington, D.C.

Music and performing has always been the center of Timotha Lanae’s world. Even as a baby, instead of the usual baby gab she would hum melodies. Timotha is named after her father Timothy, which is fitting being that she attributes her love for music to him. Timotha was born and raised in Minneapolis, Minnesota. At an early age, her father introduced her to many genres of music including Gospel, Jazz, R&B, and Soul. Artists like The Winans, Joe Sample, Larry Carlton, The Temptations, and Sade were some of her favorites.

Before ever setting foot in a professional recording studio, Timotha created her own mini studio. Using a mic, and a dual tape deck to overdub her voice and arrange background harmonies and lead vocals, Timotha created her first recordings. While on road trips to visit family in Monroe, Louisiana and Kansas City, Missouri, her father would teach her and her sister Evelena to harmonize by singing songs like More than Words, by Extreme, and the gospel traditional Encourage My Soul.

Growing up, Timotha was always happiest when putting together a performance for her friends and family to watch. Often times she would recruit her sister, God sisters, cousins and friends to be a part of a show, make music videos or write songs with her. She would work for hours on a performance and love every minute of it. It’s only fitting that Timotha become a musical theater performer, playwright, singer/songwriter/recording artist. From the minute she entered this world she’s been preparing for this moment.

Timotha spent the past year traveling between the US and the UK for performances in support of the release of her debut album RED. Her dynamic concerts have helped to build her strong European fan base. As one fan stated “She rocked the place from the moment she hit the stage. She had us in the palm of her hand… Amazing!” Of performing she says, “It’s all about tapping into raw emotion, connecting with the people and letting the music move me. If I don’t feel something when I’m on stage, how can I expect anyone else to?”.

More than just a dynamic performer, Timotha is also an accomplished songwriter. She wrote ten of the twelve songs on RED, and speaks candidly about her love for songwriting and its process, “Songwriting is like therapy for me, it’s definitely a gift from God. At times a lyrical idea will come to me, and I can’t get the words out fast enough. I don’t have to think about it, I just have to let it flow and get out of my own way.” Timotha talks of writing for her upcoming EP REWIND, which features remixes of songs from her hit album RED along with some newly penned tracks: “Writing the title track for my EP REWIND was like a purging session. When I was done I felt lighter. I didn’t struggle with any lyric, or melodic choice…the song just wrote itself.”

Timotha is a Season 6, American Idol Hollywood finalist, and has also been featured in print ads, TV/Film, national and international commercials and voice-over ads along with a host of theatrical musical productions like Hello Dolly!, West Side Story and Joseph and the Amazing Technicolor Dreamcoat. She was named Outstanding Actress in a musical for her role in Respect: A musical Journey of Women by the Minneapolis Star Tribune, and has now added playwright to her resume, penning her first original musical, REDdington. Timotha uses her music videos as the medium that unites her two passions of music and theater. In the videos Talkin To Myself, People Pleaser, and My Man (Jigsaw Remix) Timotha portrays herself while also portraying Eva Reddington, the main character from her original musical REDdington.

When asked, “Who is Timotha Lanae?”, she responds, “A lover of God, people and the gift of creativity.”