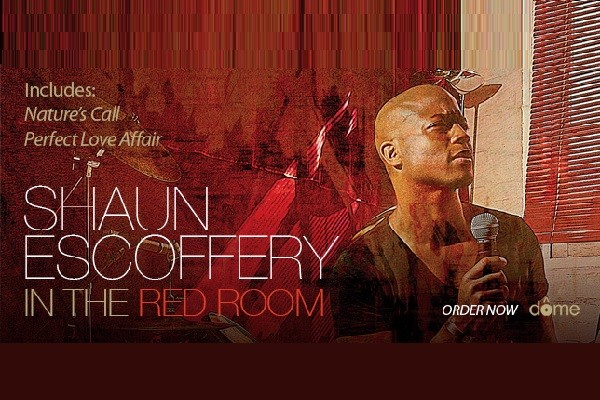 Is the incredibly talented

UK vocalist Shaun Escoffery, whose classic hits “Space Rider” and “Days Like This” are enjoyed by club goers worldwide, is back with a stunning new album “In The Red Room” which combines sheer gospel-tinged power – as on the single “Nature’s Call” – with soulful subtlety on ballads such as “Nobody Knows” and “Do U Remember”.

From his first recording with D-Influence at the tender age of 17, Shaun Escoffery has been one of the UK’s finest vocal talents – a singer with a glorious Isleys/Curtis Mayfield falsetto.  Along the way he has enjoyed support from Elton John – who has hailed Shaun as one of his favourite new artists – and actor Idris Elba, one of his oldest friends, who has contributed a remix of lead single “Nature’s Call”.

With an impressive career in musical theatre – from The Lion King to Tommy and Les Miserables – Shaun has won many critical accolades, including an Olivier Award nomination for Best Supporting Actor. In 2002 he was asked by boxer Lennox Lewis to sing the National Anthem at his title bout with Mike Tyson in Memphis – the star-studded crowd included Denzel Washington, Samuel L. Jackson, Clint Eastwood and Halle Berry.

But he now returns to his own solo recording career with what many critics consider to be his finest album, recorded “In The Red Room” with producer Gil Cang, whose past credits include writing “Whatever Happens”, recorded by Michael Jackson on his “Invincible” album.

Among the stand-out tracks picking up airplay are “Perfect Love Affair” – so evocative of Seventies Marvin Gaye –  the hooky “People” and beautiful ballad “Do U Remember”.

Shaun plays his first live date in several years at London’s Under The Bridge on November 20, together with Avery*Sunshine.

“Not since 2007 have we heard anything fresh from Shaun Escoffery.  Fast forward seven years and he has dropped a great new album on Dome Records.  Shaun has been recording since the age of 17, when he was involved with UK band D’Influence.  Now a solo artist in his own right, Shaun is singer songwriter and partnered by producer Gil Cang.  The first single ‘Nature’s Call’ is a fantastic track and shows off how ridiculously talented this guy really is.  The single also comes with a mix by actor and long time friend Idris Elba. This album has mileage and will most definitely become an all-time classic” –  Soul M8

“If anything, Shaun’s pleading, frail falsetto has acquired more depth and a maturity that really shines through on the track ‘Perfect Love Affair’.  Don’t really know why but its complexity reminds me of Marvin Gaye circa ‘I Want You’, and that’s not a band recommendation, is it?”  –  oulandjazzandfunk.com

Shaun Escoffery is a British soul and R&B singer and actor, who was born in London. His first major release was the single “Space Rider”, released by Oyster Music in March 2001. It was played regularly by the BBC Radio 1 DJ Trevor Nelson and The Dreem Team.[1] It peaked at #52 in the UK Singles Chart, and was followed by the UK #53 hit, “Days Like This” in 2002.[2] After releasing several other singles on the same label, Escoffery became more noticed for his voice – being noticed by Lennox Lewis, who invited him to Memphis, Tennessee to sing the national anthem before his boxing match with Mike Tyson.[1]

In 2007, Escoffery released an album entitled Move into Soul, which included cover versions of “A Change Is Gonna Come” and “I Heard It Through the Grapevine”.[1] Also that year, he received a Laurence Olivier Award nomination for his work in the stage musical, Parade, and the following year played Mufasa in a London production of The Lion King.[1] Escoffery’s other West End credits include Les Misérables, Smokey Joe’s Café, Tommy and Mama I Want to Sing.[3]

In 2014 Escoffery returned to the recording studio to release a new album “In The Red Room” for Dome Records. The album is co-written and produced by Gil Cang, whose credits include writing “Whatever Happens” for Michael Jackson. The first single “Nature’s Call” was released in August, 2014 and entered the UK Airplay Top 5