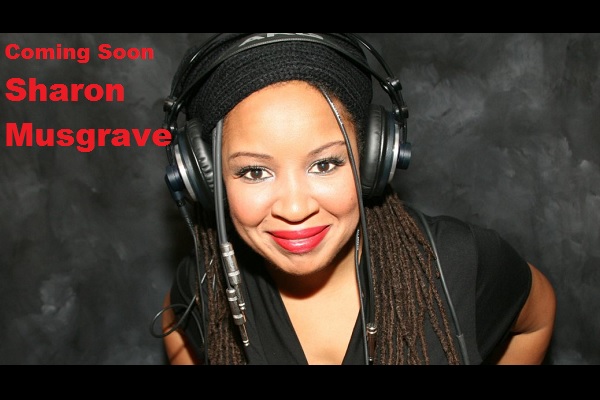 is the Fantastically Talented

Born in England of Dominican parents but raised in Canada, where she has returned to live, Singer/Songwriter Sharon Musgrave shot to prominence in 1991 whilst collaborating with William Orbit on the Bass-O-Matic project.

They achieved international status with the hit Fascinating Rhythm (Virgin), which Sharon co-wrote. An album soon followed, cementing the groups worldwide status as a credible dance act and Sharon’s ability as a writer. A world tour established Bass-O-Matic as an act that could cut it live.

In a recent interview with the UK’s Record Mirror, William Orbit, (Grammy for Madonna’s “Ray of Light”), throws accolades Sharons way saying, “I dont have to worry about playing live when I’ve got Sharon on stage with me, because she’s a consummate singer.” William adds “No worries, shes done it all. The studios my home, the stage is hers!”

In 1992 Sharon was invited by WEA to work with jazz pianist Julian Joseph. She collaborated on the ‘Language of Truth’ album singing the Curtis Mayfield song ‘The Other Side of Town’. This track was eventually used as the single from the album. The video for this track inspired a Teachers Whisky commercial, in which Sharon appeared, playing a blues singer in a 60’s bar scene, singing the classic ‘No Greater Love’. Sharon gigged with Julian promoting the Language of Truth album and touring with such jazz greats as Herbie Hancock.

Sharon’s studio work in England, both as a writer and session singer, led her to work with many notable performers, including Courtney Pine, Maxi Priest, and writers/producers, Terry Briton, Henry Priestman, Jimmy Haynes, Steve Harvey, Phil Chill and Adrian Wyatt.

Her final collaboration in the UK before returning to Canada was in 1998 on the ‘Get in the Swing’ album with Steve Alpert.

Since returning to Canada Sharon has enjoyed a successful solo career both live and on record. Her most recent Canadian solo release in 2002, ‘Selah’ (Zosar Records) earned her two nominations, Best Songwriter and Best Spoken Word, at the prestigious Urban Music Association of Canada award show, held that year in Toronto. Jude Kelly, VP of UMAC claims “the title track Selah is especially brilliant”. The video for this track achieved top twenty status on the Bravo video chart.

Her latest international release ‘Nobody’ is a track included on the groundbreaking CD ‘Soulfragettes’, (Recoup/Timewarp). This is a unique compilation of powerful R&B female singers. Sharons track, co-written with Adrian Wyatt, has been singled out for special attention.