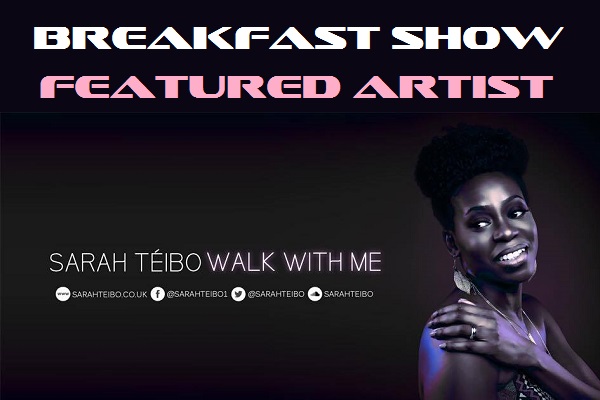 From Monday 9th May

Is the amazing Sarah Teibo.

Sarah Téibo is a breath of fresh air to the UK contemporary and urban Gospel music scene, bringing a soulful flavour to the genre. Launching her solo career in November 2015 with the release of her debut single ‘Steal My Joy’ which received worldwide airplay, debuted at Number 2 on the UK Christian Charts in December 2015 and also bagged her two nominations for ‘Best Newcomer’ with Premier Gospel Awards and GXMM Awards in 2016, she now takes it up a notch with the release of her debut album ‘Walk With Me’. One music critic describes her as ‘truly amazing with a rich effortless vocal tone and great interpretation of melody’.

A prolific vocalist and songwriter, having performed and ministered in Gospel choirs from her teenage years and supported some prominent artists including Noel Robinson, Sarah learnt the importance of faith in God and started writing music as a teenager when her family was faced with eviction and the threat of homelessness. Her deep, unpretentious yet uplifting lyrics embellish this new project.

In this 11-track album which ranges from soulful, infectious numbers such as ‘New Day’ and ‘Special’ to bouncing up-tempo tunes like ‘I Will Sing!’ and deeply inspiring tracks like ‘Keep The Faith’, she fuses her uniquely soulful, yet contemporary style and powerful lyrics to produce a new and exciting sound which will introduce you to the ‘dynamic force’ that is Sarah Téibo.