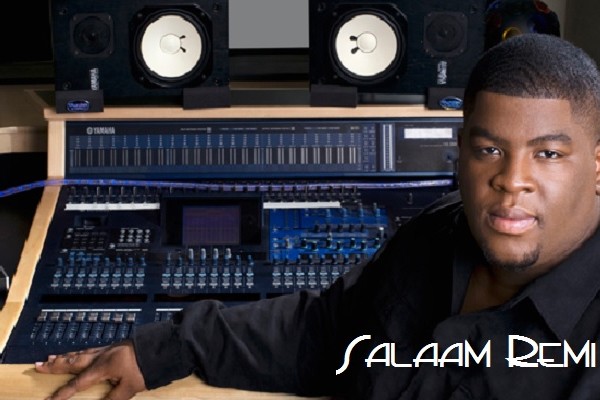 IS THE FANTASTIC – “Salaam Remi“

After twenty-plus years in the game—after The Fugees, after Amy Winehouse, after crafting classics for NAS and scoring films and TV shows—SaLaAM ReMi remains at the forefront of the music industry and keeps pushing further into the future. He’s still one of the most prolific and in-demand hit makers around, and he’s still impossible to pigeonhole or confine inside any one box or category.

SaLaAM ReMi is a producer, composer, musician, and arranger, but he sees his true gift as being a “talent developer”. The simplest way to explain what SaLaAM ReMi does is that he identifies and collaborates with great artists and makes great music.

To get a sense of his versatility and restless creativity, just consider some of his recent accomplishments: in 2012 alone ReMi scored the late Whitney Houston’s musical Sparkle, produced the title tracks for albums by Alicia Keys (Girl on Fire), Miguel (Kaleidoscope Dream), and Nelly Furtado (The Spirit Indestructible). He also produced a Ne-Yo record featuring Diddy and Fabolous called “Should Be You” and went 8 songs deep on one of the year’s best rap albums, Life Is Good by Nas. This body of work gave him a coveted Producer of the Year Grammy nomination as well as having his 2012 productions nominated throughout various other Grammy categories, including two nominations (Tamia and Anthony Hamilton) for Best R&B Album, a Best Rap Album nomination (NAS), Best Rap/Sung Collaboration (NAS/Amy Winehouse) and Best Urban Contemporary Album nomination (Miguel), just to name a few.

His recent accolades aside, SaLaAM ReMi’s place in history would be secure if he was only the producer who saved The Fugees career with the “Nappy Heads” remix or the trusted confidante who helped a young Amy Winehouse tap into her creativity. But he didn’t stop there. His plan, brash as it may sound, is nothing less than to “save the music,” as Nas said at the end of the Remi-produced banger “I Know I Can.”

AND HOW EXACTLY DOES HE PROPOSE TO DO THIS? “LET’S ADD MORE OPTIONS,” SAYS REMI. “WE’VE GOT TO KEEP PROGRESSING BECAUSE IT’S BECOME SO MUCH OF A CORPORATE MIND STATE. EVERYBODY’S JUST LOOKING AT, ‘WHAT’S MY STOCK QUOTE?’ OR ‘WHAT ARE MY FIRST WEEK SALES?’ WHEN THEY SHOULD BE ASKING, ‘DID YOU SAY ANYTHING?’ AND ‘HOW WELL WILL THIS MUSIC STAND THE TEST OF TIME?’”

If ReMi sounds like an old soul, maybe that’s because his dad is a music man from way back. Van Gibbs led bands, produced, and arranged with the likes of Belafonte and Gloria Gaynor, then did record promotional work, taking his son along to legendary clubs like Latin Quarters or to meet DJs like Frankie Crocker, Mr. Magic, and Marley Marl. SalaAM used to carry crates for Chuck Chillout and spent years working with Funkmaster Flex as “Salaam the Overseer.” All those years of hands-on experience come through in his work.

During his 20-plus-year career, ReMi has methodically put together an eclectic track record of hits that are capable of rocking a block party or infiltrating the pop charts. “I like to make music for the ghetto with pop appeal,” is how he puts it. Whether hip-hop or pop, reggae or merengue, SaLaAm ReMi’s records run the gamut of sounds and styles but they’re always richly textured and flawlessly crafted. “I want you to feel like it has that much grit and soul, and sonically as well as musically, it just feels right,” he says, “like well cooked food in a seasoned pot.”

“I SAY LET’S MAKE MUSIC FIRST AND THEN TITLES SECOND. LIKE ARE WE HUMAN FIRST OR WE DIFFERENT RACES FIRST? YOU KNOW WHAT I’M SAYING? SO IF I’M HUMAN FIRST, THEN FIRST OF ALL I’M JUST ABOUT MAKING MUSIC; BECAUSE MUSIC IS SUPPOSED TO BE ABOUT TRANSMISSION OF EMOTIONS. IF I FEEL HAPPY AND I MAKE SOME MUSIC, HOPEFULLY YOU’LL LISTEN TO IT AND FEEL HAPPY TOO. ”