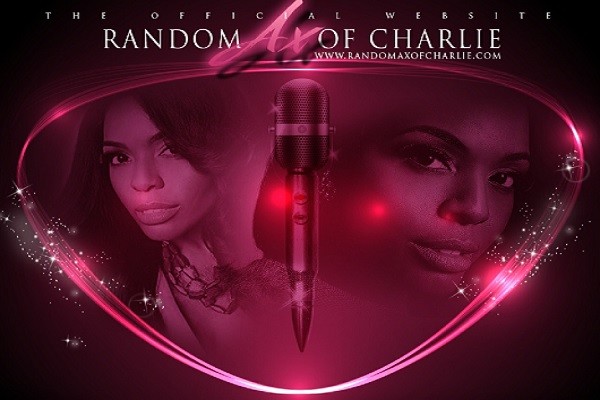 As part of the songwriting team, The Conglomerate, she has co-written songs alongside top producers: Stargate (Ne-Yo, Shakira), Kosine of “The Interns” (Nicki Minaj, Big Sean), Steve McKie (Jill Scott, Estelle), and spent much of 2012 touring as a background vocalist for Estelle. “In the course of writing songs for other artist and singing background, I found my own voice,” expresses Charlie. “I’ve always wanted to be an entertainer. The most recent tour with Estelle lit an extra fire under me and made me even more committed to completing what I began, my own career as a performer/entertainer.”

While Random Ax Of Charlie, is a pretty cool name for her band, for Charlie it’s an amalgamation of all that she is –your girl next door, sorority sister, and debutant, around the way fly-girl with enough sass to roll with the fellas. “Musically my style has been called retro nouveau, throw-back swag with a modern twist. My debut album may feel like a random collection because each song is so different from the next, but the thing that ties it all together is soul.” A huge fan of the live performance, Charlie is recording her debut album with the live instrumentation of her band. “Each song I’ve recorded was created with the live experience in mind. Studio recordings are great and I certainly want people to support my recordings, but I am the type artist who you’ll want to see perform live. One of the things I love about live music is the ability to improvise and performing as the lead vocalist of Random Ax of Charlie gives me the flexibility I need to experiment with sound, play with rhythms, blend genres. You’ll never know what to expect with me,” she giggles!

Music fans in the U.S. and abroad, who have been anticipating her debut release will be delighted to know that Charlie will be releasing a mix tape entitled BPMs. The first song released from the project is teaser track, “You Should Let Me Love You” with music video directed by Serringe. Breakout tracks produced by The Conglomerate include “Try Again,” “Sorry I” featuring 20 Grand Pikaso, and a cover of “Will You Still Love Me” originally recorded by The Shirrelles (1960). As she digs through her musical vault prepping her debut, she calls on the artists who have inspired her musically. “I love so many types of music, but my all-time favorite musical artists are Toni Braxton, Stevie Wonder, and Gladys Knight. They pour their hearts into their lyrics – honesty, emotion, vulnerability, strength, and pure vocal delivery,” expresses Charlie. “It’s so important to me that I’m honest with my audience because in sharing my life musically, I’m able to reach people who are going through the same thing.”

Like many great performers, Charlie started singing in church. A few songs she recorded for her demo tape became reference tracks for other artists. “I was writing songs and shopping my demo, but whenever I’d submit tracks, they’d call back wanting to know who wrote the songs. Mama didn’t raise a fool and I realized quickly that I could make a career as a songwriter.” She wrote the heart-wrenching “Final Goodbye,” selected for Rihanna’s Girl Like Me album, after surviving an abusive relationship herself. “I am thankful for every experience in my life, the good and bad. It’s shaped who I am and has added to the depth of my songwriting. I can write these lyrics, ‘I never should of waited so long to say what I’ve always known since the very first day. Thought that you would stay forever with me, but the time has come to leave,” because I’ve been there. I’ve been so in love that I couldn’t see when it was time to go.”

When not in the studio recording or performing, Charlie hosts “VEVO’s Hot This Week” wrap-up show which covers the biggest premieres and best VEVO originals from this week as well as what’s on tap for next week. She also hosts a beauty blog on her YouTube channel sharing her fitness journey and favorite beauty products. To see Random Ax Of Charlie in action, check out this EPK! “Random Ax Of Charlie is a way for me to connect with you in my own voice. My intention is to relate by sharing myself musically. This is my chance to make the world to commit a Random Ax Of Charlie.”