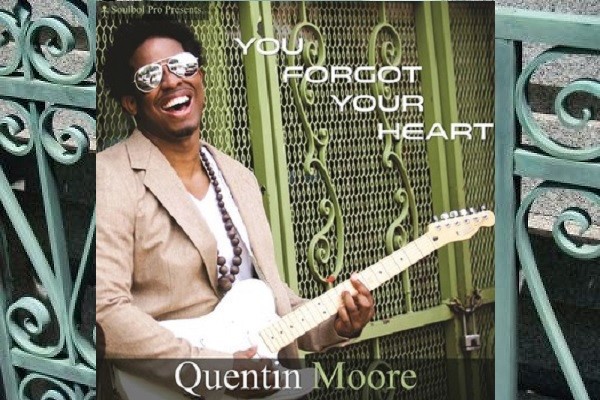 The Breakfast Show Featured Artists week commencing 16 December 2013 will be:

“Quentin Moore is the pulse of Southern Soul and R and B. With his smooth vocals and heartfelt guitar playing, Moore has the magnetism of a Piped Piper, drawing listeners from the void of emptiness and drowning them into a sea of pure sultry paradise. When Quentin performs, there isnt an idle feet or a hand not being held. Quentin
Moore is not a rising star but a star risen!”

Quentin Moore is “The Last Mohican” of southern-style soul. In an era where Black music is dominated by electronic samples and rappers, this avant-garde musician breaks the mold with live instruments, particularly the vintage sound of the Fender Rhodes, which conjures memories of Stevie Wonder and Donny Hathaway. Lyrically, Quentin Moore embraces everyday topics like romantic complexities and brings a feel-good vibe to his audience though each song. He displays his creativity through his return-to-innocence yearnings in “Vintage Love” or his swagger in the sexually-charged tune, “Gimme Some Sugar”.

Born and raised in the Austin, Texas, dubbed the live music capitol of the world, Quentin developed an ear for soul in the church. Within the walls of St. Stephens Baptist Church, he cultivated a passion for drums and electric organ that yielded early success on the drum line in middle and high school. As his musical taste matured, his influences included R. Kelly and The Isley Brothers. As a student and athlete at the University of North Texas, he was inspired by jazz by artists such as Jimmy Smith, Jaco Pastorius, Herbie Hancock, and Roy Hargrove. He polished his skills and added the electric guitar and bass to his repertoire, and also formed his original/cover band called Soulbol. With a plethora of instruments under his belt, he continues to reinvent himself with a style that is often compared to artists ranging from Curtis Mayfield to Jamie Foxx to Marvin Gaye but remains all his own.

This soul man commands the audience in every live performance. To see Quentin perform is to witness a ‘60s revival of glory days of Sam Cooke and James Brown, when ladies were clamored to their feet with snapping fingers and shrieks of pleasure. Quentin instantly morphs into a preacher and a sex object, or rather both the sinner and saint, with outrageous antics, such as crooning to a girl he’s plucked from the crowd or playing an instrumental song that is so technical, it requires three drummers. Because Quentin’s vocal range spans from tenor to second-alto, he can sing in deep, sultry tones like Teddy Pendergrass or release the erotic screams of Prince and Al Green.

With his popularity on the rise throughout the southern United States, Quentin Moore has shared the stage with internationally-recognized artists such as Innercity All Stars, Geno Young, Chaka Khan, Dwele, Ollie Woodson (temptations) and Angela Blair, for whom he acted as Musical Director. He has also performed with keyboard maestros Bobby Sparks and R.C. Williams. The 27-year-old entrepreneur has launched his regional distribution marketing campaign for radio, CD stores, and online sales with the release of his first LP, “Vintage Love”. As one of the top selling Urban R&B/Soul albums on CDBaby.com, “Vintage Love” promises to be a sweet melodic treat. When it comes to the music of Quentin Moore, there is no question; his talent speaks for itself.