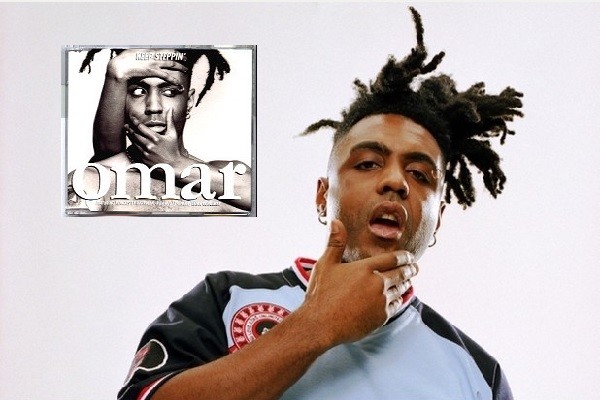 Omar has just re released Sing [If You Want It], on Tru Thoughts, the British soul supremo’s sixth and perhaps funkiest album so far. Featuring guest appearances from Stevie Wonder, Angie Stone, Common, Estelle, Rodney P, JC Bentley, Canitbe and Ashman, and with additional production from Omar’s brother, Scratch Professer, it’s a brilliant collection of music that manages to break new ground for the artist, yet at the same time re-establishes that unmistakable, unique Omar signature sound with his army of fans.

On the last album, Best By Far, I was very influenced by soundtracks and Latin jazz,” explains Omar. “This time I wanted something a bit more funky, something to put my music back in the clubs. I still use the live instruments and the strings when I feel them, ‘cause that’s me, but the kick and the snare are much louder this time. That’s why my brother’s more involved, ’cause he’s great with those hip-hop beats.”

It is, of course, a major coup for any UK recording artist to be able to call on the services of a musical legend like Stevie Wonder. The simple truth is that Stevie has been a fan of Omar’s music since he first heard There’s Nothing Like This back in 1992 – the same year he promised to write Omar “his first number one”. The 14-year wait turned out to be well worth it when, one day, Stevie called Omar out of the blue and told him he was in London and had just what he’d promised. A jam session later and the irrepressibly funky and melodic Feeling You, with Stevie on vocals and keyboards, was born.

As for the other star guests on the album, well, they’re all either long-standing admirers of Omar’s work and/or personal friends. Angie Stone, for example, had often dropped Omar’s name in interviews over the years and she recorded her own version of Omar’s track Little Boy. This then led to a contribution to Omar’s last project when she stepped in to lay the co-lead vocal on one of Omar’s two duet versions of Be Thankful. She applies her distinctive stamp to two tracks on Sing [If You Want It], the gorgeous laid-back ballad All For Me and the driving seduction funker Stylin’.

Conscious hip-hop don Common has also worked with Omar before: the UK soulman lent his talents to Common’s Electric Circus album whilst on one of his now increasingly frequent touring visits to the States; in return Common teams up with Brit-hop legend Rodney P and rising MC Ashman and Canitbe for the atmospheric, vibrant Gimme Sum, already being touted as a future single from the album.

Back home, MOBO winner Estelle supplies a poignant rap to the anti-gun tune Lay It Down, adding potency to one of Omar’s best ever lyrics. Meanwhile ace new vocalist JC Bentley flows sweetly over the bossa groove that is Be A Man.

All in all, it’s measure of Omar’s generous nature that he’s accepted so many accomplished performers onto his album at the same time, and of his self-possession and talent that at no time does Sing [If You Want It] sound like anything other than an Omar album, first and foremost. It’s a great way to christen his new studio, Back A Yard.

“I’m out in the open now,” says Omar. “I left a label and created a new joint venture with my new manager called Blunt Music– and so now I can do what I want, I’m in control. If I want to spend all day in the studio, I can and I don’t have to worry about the time or the cost I’m racking up. Plus now I can take my music direct to the fans.”

Which Omar has been doing at all opportunities during the past five years. He’s toured America a half-dozen times, for example, at last reaching out to a massive underground of support that he’d always known was there. More recently, he toured the Far-East with a UK all-star package put together by Incognito’s Bluey Maunick, a venture that brought him to audiences he wasn’t even aware had heard of him: 10,000 Indonesians singing back There’s Nothing Like This to him soon put him right on that score.

Like us, they’ve been following Omar’s adventures since he first came to prominence more than a decade-and-a-half ago, when his debut single for indie label Kongo Dance Mr. Postman/You And Me made him a hot name on London’s underground. It was soon afterwards that the success of his Ohio Players-influenced love ballad, the much celebrated There’s Nothing Like This, led to his signing to Gilles Peterson’s Talkin’ Loud label. Omar released a couple of albums for the Phonogram affiliate during 1992/3, the first a re-working of his Kongo set for the wider audience, the second, Music, a vastly more orchestral and organic affair that highlighted Omar’s maturing as a composer, arranger and vocalist. Aside from the memorable title song, standout tracks included the still requested Get To Know You Better and the brilliant duet with Carleen Anderson, Who Chooses The Seasons.

Thereafter Omar signed to RCA, for whom he cut two further albums that notched up acres of critical acclaim as well as introduced him to several of his musical heroes and heroines. On 1994’s For Pleasure, the set that includes such Omar signature songs as Saturday, Outside and the Erykah Badu favourite Little Boy, he worked alongside the legendary former Motown producers Leon Ware and Lamont Dozier. On ‘97’s This Is Not A Love Song, largely a collaboration with LA-based producer David Frank, he did a great cover of The Stranglers’ Golden Brown and got to sing with one of his all-time favourite vocalists, Syreeta Wright on two songs, including the sumptuous slowie Lullaby.

By 2000, Omar had moved on again, this time signing up with hip French imprint Naïve Records. The following year, now well established as the leading icon of the UK’s resurgent soul movement, Omar released his fifth album, Best By Far, a self-produced set on which he allowed his interest in cinematic soundtracks and jazz to rise to the surface. Once again, the star names turned out: on the album version of Be Thankful, a re-cut of the William DeVaughn seventies soul hit, it’s Erykah Badu who came good on her promise to work with our man. [On the version released as a single, it was Angie Stone on co-lead.] Meanwhile recent MOBO winner Kele Le Roc supplied the strident lead on the anthemic groove Come On, also a single edit.

A former principal percussionist of the Kent Youth Orchestra and later graduate of the Guildhall School Of Music in London, Omar has now been making music for more than 21 years. And while it would be true to say that during that time the high quality of his work has not really been reflected by number of pop hit singles he’s enjoyed, there’s certainly no sign of his being discouraged. Quite the contrary in fact: with Sing [If You Want It], Omar is just embarking on a new phase of his career, one that’s designed to bring him directly to a wider public than ever before.

“I’m enjoying life so much right now,” he says. “I play with great bands, there’s always new music to make, new styles to blend, new people to reach… man, I went to Sainsbury’s the other day and it felt like I’d been on Crimewatch or something, the amount of people looking over and coming up to shake my hand. It really feels like a new beginning for me.”

Omar is currently working on album no 7 ‘The Man’ which is due for release in 2011 & has featured on a number of tracks by Zed Bias, King P, Dru & Perez & Live Tropical Fish as well as touring like a madman. As well as his music Omar has branched out into voice overs (Alfa Romeo) & acting (Been So Long & Love Song) so watch this space for more on Omar.