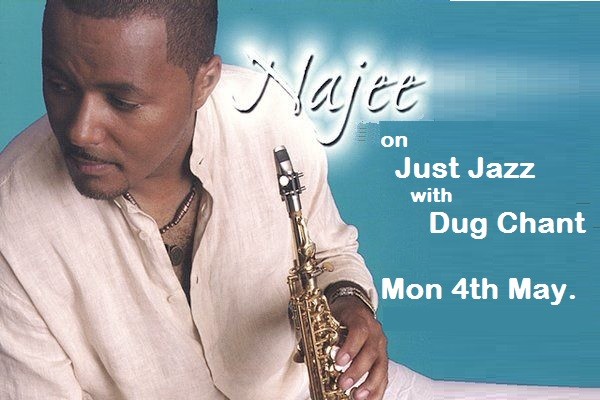 Two-time Grammy nominated saxophonist and flautist, Najee has made a career following his heart and keen musical intuition by pushing musical boundaries, all of which have made him an international pioneer in the music industry. Having collaborated with everyone in the music business from Prince, Quincy Jones to Stevie Wonder, Chaka Khan and Herbie Hancock, Najee’s technical agility, grace, compositional prowess, unbridled passion and fearless genre bending have made him one of the most sought after musicians of his generation. With two Platinum and four Gold albums under his belt, Najee is an icon whose musical vision spawned an entire new genre by fusing the music close to his heart (R&B and jazz).

An alumnus of the New England Conservatory of Music, Najee was mentored by jazz giants Frank Foster and Jimmy Heath as well as classical maven and flutist Harold Jones of the New York Philharmonic. When he emerged onto the scene with his soulful R&B, and jazz fused sound, with songs such as “Najee’s Theme,” “Sweet Love” and “Betcha Don’t Know,” it was not long before his trademark soprano found a home at the top of the charts and he carved out his own unique niche in the musical landscape. “My first love was the tenor saxophone and flute,” confides Najee. “It was my brother Fareed who got me to play soprano saxophone. We would argue over me not wanting to play soprano. Then one day someone gave me a soprano saxophone and I played on his songs. That began my soprano saxophone career and little did I know then, that would be the instrument to make me popular. As I began to develop on my instrument, John Coltrane, Charlie Parker, Yusef Lateef and Hubert Laws on flute were some of the artists that inspired me. As an industrious and hungry young musician, Najee had the good fortune of coming through Dr. Billy Taylor’s now legendary Jazzmobile program. While a student at the New England Conservatory (where both Najee and his brother attended) he studied jazz with George Russell and Jaki Byard. When he finished school Najee returned to New York in the early 80s and was lucky to land a gig with Chaka Khan along with his brother and guitarist Fareed (who is now his manager). In 1986, Najee’s Theme, was released and the saxophonist earned a slot on tour with singer Freddie Jackson. The following year, Day By Day was released, and in 1991, Tokyo Blue, which is one of Najee’s most successful and enduring recordings. Tokyo Blue (which was produced by Najee’s brother Fareed) and Day By Day both went Gold and led to two Soul Train Awards for Najee (Best Jazz Artist in 1991 and 1993). Just An Illusion came in 1992 and around this time he collaborated with such iconic figures as Quincy Jones and jazz greats Stanley Clarke, Billy Cobham and Larry Carlton which resulted in the album Live At The Greek. Following his collaborative live album, his next album Share My World was released in 1994 and was followed in 1995 by a critically acclaimed tribute to Stevie Wonder’s 1976 classic, Songs In The Key Of Life. The CD was produced by George Duke and features Herbie Hancock and Sheila E. among others. His CD Morning Tenderness was released in 1998 and went to #1 on the contemporary jazz charts.

For Najee, the late ‘90s were marked by extraordinary international experiences, from performing at Nelson Mandela’s birthday celebration in South Africa to playing as a special guest of President Clinton at the White House at an event honoring President Jerry Rawlings of the Republic of Ghana. Najee also spent two years of touring (2001-2003) with Prince and appears on Prince’s albums “Rainbow Children” and “One Night Alone”. In 2003 Najee released Embrace featuring special guests Roy Ayers and BeBe Winans. My Point Of View was his follow up in 2005 featuring his good friend and vocalist Will Downing. 2007’s Rising Sun, joined Najee with Phil Perry and Mind Over Matter, from 2009 paired Najee with singer Eric Benét. 2012 saw the release of Najee’s critically heralded The Smooth Side Of Soul.

October 22, 2013, Najee released his highly anticipated second recording for Shanachie Entertainment, The Morning After – A Musical Journey. “I am becoming increasingly comfortable with sharing more diversity in my recordings,” states the humble and eloquent musician. “This is something that I have done as a musician my entire career in live performances. I believe my audience is ready to hear me expand beyond the ‘Smooth Jazz’ genre.” Najee’s latest musical offering is a commanding statement from the peerless instrumentalist and composer, which is a testament to him being one of the top-selling jazz saxophonist in contemporary jazz.

A visionary, Najee assembles an array of world class musicians on The Morning After – A Musical Love Journey. Featured artists on the CD include producer Demonte Posey (Eric Benet, Toni Braxton, and Babyface), bassist Bill Sharpe (Dave Coz and Barbara Streisand), guitarist Ray Fuller (George Duke, Anita Baker, and Whitney Houston), drummer Daniel Powell (Tamia), bassist Brian Bromberg (Miles Davis and Herbie Hancock) and drummer Joel Taylor (Joe Sample’s current band). Chart-topping R&B diva Meli’sa Morgan also joins Najee for an unforgettable duet. The Morning After – A Musical Love Journey opens with the sound of Najee’s voice as he anxiously awaits to board his plane but is unexpectedly delayed waiting for a certain special woman. Alas, she arrives and the journey begins. Najee explains, “The album title describes a fantasy trip where two people meet and experience their journey together.” The saxophonist describes the making of his new CD as an intense process. “It was recorded as a live studio album in two ½ weeks, during which time we also mixed and mastered the music. I would say the anticipation was very much part of the journey with this record.” Najee’s musical adventure unfolds with the jubilant “Rendezvous,” featuring his robust tenor saxophone. The Morning After – Musical Love Journey finds Najee transporting listeners around the globe to locations that have inspired him in some way. The soulful, fluid and breezy “San Tropez” takes us to the French Riviera while the dubbed out and mysteriously hypnotic “Mafalala,” was written in tribute for the township Maputo in Mozambique. “The town is very poor where some homes have no running water or electricity and the living conditions are very difficult according to our Western standards,” recalls Najee. “What impressed me and the members of my band, was in spite of the poverty, hardships and challenging living situations, the people did not let it reflect their inner resolve. When you see their faces, their spirit reflects a sense of pride and inner glow. This song is tribute to the courageous and strong people who live there.” The Morning After – A Musical Journey also makes an express stop – in one of Najee’s favorite cities. The “Champs Elysees,” the album’s hit single, is inspired by the architecture, history, food and culture of Paris.

Born in the Greenwich Village in New York City and raised in Jamaica, Queens, Najee’s musical pursuits began in grade school. The Morning After – A Musical Journey, takes us back to Najee’s musical roots with his swinging and in-the-pocket number “W 72 and Broadway.” Najee, who fell in love with jazz at the age of eight says it all began while growing up on the upper west side of Manhattan. “My mother would play recordings of Miles Davis and other jazz greats in our household every day,” remembers the saxophonist. “As a child I would walk in my neighborhood and pass by an array of jazz lounges, restaurants, where you could hear jazz musicians playing throughout the day.” Najee also takes the opportunity to pay tribute to his dear friend, the revered late pianist and master producer George Duke. The two met in ‘90s and throughout the years developed a close friendship and toured together with artists Quincy Jones, Dianne Reeves, Will Downing and numerous others. Najee shares, “The first time I met George Duke was in 1991, it was my second time winning the Soul Train Music Award for “Best Jazz Artist.” After I accepted the award, I was rushed on stage to perform with him and Dionne Warwick for the song “Night and Day.” Afterwards, George and I began working on my album Just an Illusion for which he produced the track “Loving Every Moment” featuring Jeffrey Osborne. George later produced my entire album Songs in the Key of Life, a tribute to legend Stevie Wonder.” Najee’s composition, “Shinjuku,” (named after an area of Tokyo) featured The Morning After – A Musical Love Journey was write for Duke. “It reminds me of my time in Asia touring with George,” comments Najee. As a colleague and dear friend in the business, those experiences are very memorable and I will cherish them always!” Also featured on the new CD is Najee’s memorable sultry duet with R&B diva Meli’sa Morgan called “In the Mood to Take It Slow.” Najee along with his brother Fareed first worked with Meli’sa on tour with Chaka Khan. Najee later recorded the duet “Do You Still Love Me” with Meli’sa in 1985. Najee declares, “I believe Meli’sa is one of our R&B treasures and I am grateful for our reunion on this project.”

With the release of The Morning After – A Musical Journey, Najee concludes, “Making music at this point in my career is still exciting and I am always evolving. As a musician the love of performing for people whether in studio or live is still a gratifying experience. The best feeling to me is presenting something new to the world!”