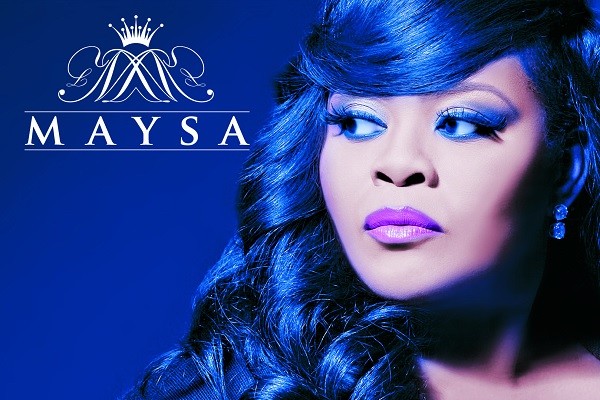 There are very few singers on the contemporary scene who have a unique, instantly
identifiable vocal sound; there are even fewer who have the stylistic range to encompass
both Jazz and R&B in their performances. Grammy-nominated Soul/Jazz diva Maysa,
who celebrates her 20th year as a solo recording artist this year, marks that achievement
with her new album
BACK 2 LOVE, a tour-de-force that validates her status as the greatest Soul-Jazz
singer of her generation-the latest in a distinguished line of singers that stretches
back through Anita Baker, Chaka Khan, Will Downing, Angela Bofill, Marlena Shaw
and more recently, Ledisi and Chrisette Michele.
BACK 2 LOVE, which is set for a May 26th release, may be her widest-ranging album
yet, incorporating contemporary R&B, jazzy Soul balladry, straight-up dance music,
inspirational pop and more. With production from the likes of J.R. Hutson (Jill
Scott, Earth, Wind & Fire), Lorenzo Johnson (Ledisi), Stokley Williams (Mint Condition,
Kelly Price, Wale’), and Chris “Big Dog” Davis (Kim Burrell, George Clinton), the
album coheres around Maysa’s peerless vocalizing highlighted by her amazingly rich,
evocative vocal tone. That’s the sound that led her mentor Stevie Wonder to proclaim
“Maysa is WONDERful!” In the wake of her first Grammy nomination and Soul Train
Music Award, it seems that the world-at-large is finally recognizing just how special
an artist Maysa is.

“BACK 2 LOVE represents the fact that I’m ready to get back to having a personal
life with a very special man in my life. I have worked hard on my career so I could
take care of us (my son and I). My son is almost 16 and I think he is old enough
to have a mom who is going to be dating and possibly married. I am ready to meet
Prince Charming. The music is exactly who I am. Being a Shanachie artist, I was
always given the freedom to express who I am musically but this time I feel like
spiritually we all went to a pure place to get this music. The music represents
who I am as a woman and a human being who lives to love people. As a professional
singer I should be able to sing anything and my records are just me trying to love
everyone. And that’s why I am proud to be able to go from Jazz to R&B to Pop, etc.”

BACK 2 LOVE kicks off with a classic dance-pulse on the title track. Though Maysa
has recorded dance tracks before (mostly notably with Incognito), those often had
a Brazilian or more overt Jazz spin but BACK 2 LOVE shows that Maysa has what it
takes to be a dance diva if she wanted to.

The opener is followed by the distinctive R&B groove of “Keep It Movin'” produced
by Mint Condition’s lead vocalist/producer/songwriter Stokley, who also contributes
a guest vocal on the track. It is unlike anything Maysa has done previously and
the chemistry between her and Stokley is magical. “Stokley is an amazing artist,”
Maysa says. ” I love his writing, his voice and performing style. I think our styles
are like smoke and fire together, like a sweet barbecue sauce! I was so happy he
joined me on this record.” Stokley adds, “Working with Maysa was so familiar even
though we’ve never collaborated before. We have a lot of the same influences. Maysa
has such a unique gift. Think if velvet, butter & brown had a sound… weave a few
high textures in there, that’s her! You feel her soul when she delivers a song.
I’m very honored to have worked with Maysa.”

The song “Heavenly Voices” is a masterpiece of jazzy Soul, quintessential Maysa,
a spiritually-oriented song. Likewise, such tracks as “Last Chance For Love,” “Go
Away Little Boy,” and “Smilin'” all have the hallmarks of Maysa’s classic style-rich
vocal sound, deeply felt, evocative phrasing, lyrics relating to affairs of the
heart, and a song structure that embodies the essence of R&B but adds a Jazz sensibility.
“Go Away Little Boy” is inspired by Marlena Shaw’s classic hit of the same name.
“Big Dog, my producer, came to me with the title and the music and I thought it
would be fun to create our own vibes,” Maysa relates. “Marlena Shaw’s version is
perfection and one of the songs I listened to growing up. I would never try to cover
it.” On “Last Chance For Love,” a Seventies-style R&B ballad, Maysa is joined by
the incomparable Phil Perry, likewise a singer who is revered by other musicians.
“Finally working with Phil was amazing,” Maysa says. “He is the falsetto king and
my buddy! He is a master vocalist and I learn a lot from him whenever I hear him
sing. Years ago before we were Shanachie artists, we had six-hour marathon phone
conversations about the industry and here we are! He’s a fun and wonderful person.”

Maysa Leak was born and raised in Baltimore, MD and knew by the time she was six
that she would be a musician. “I was six years old when my mom took me to see Purlie,”
she recalls. “When Melba Moore came on stage and sang her heart out, I knew at that
moment I wanted to make people feel the way she made me feel.” Maysa graduated from
Morgan State University with a degree in classical performance, meeting Stevie Wonder
while a student. Upon graduating she moved to North Hollywood to join Wonder’s Wonderlove
group, with whom she performed for a year, appearing on the Jungle Fever soundtrack
and such television shows as Oprah and The Tonight Show. In the early Nineties,
Maysa auditioned over the phone to become the new lead singer of the acclaimed British
Jazz/Funk/R&B band Incognito, moving to London for four-and-a-half years. She has
appeared on over nine Incognito recordings and continues to appear as featured vocalist
with them from time to time. Maysa recorded her self-titled debut album for GRP
in 1995, following it up with ALL MY LIFE in 1999, OUT OF THE BLUE in 2002 and SMOOTH
SAILING in 2004. She then made an impact with her interpretations of classic soul
music on two acclaimed albums for Shanachie Entertainment, SWEET CLASSIC SOUL (2005)
and FEEL THE FIRE (2007), on which she showed her ability to put her own unique
stamp on familiar songs from the 1970s era. METAMORPHOSIS (2008) showed off Maysa’s
prowess as a composer and A WOMAN IN LOVE (2010) found Maysa returning to her roots
as a jazz singer. MOTIONS OF LOVE (2011) was highlighted by the ballad “Have Sweet
Dreams” co-written by Stevie Wonder (who plays harmonica on the track) and inspired
by First Lady Michelle Obama, as well as “Flower Girl,” a duet with Dwele. BLUE
VELVET SOUL (2013) yields Maysa’s first Grammy nomination, for her performance of
the song “Quiet Fire.” A VERY MAYSA CHRISTMAS (2014) delighted fans as the songbird
released her first ever holiday album. Now BACK 2 LOVE brings together all the facets
of Maysa’s artistry in one album. “I hope people love this album,” Maysa says. “I
want this to be the soundtrack to their summer of 2015 and I pray it helps somebody
feel good and forget problems and worries and just feel love.”