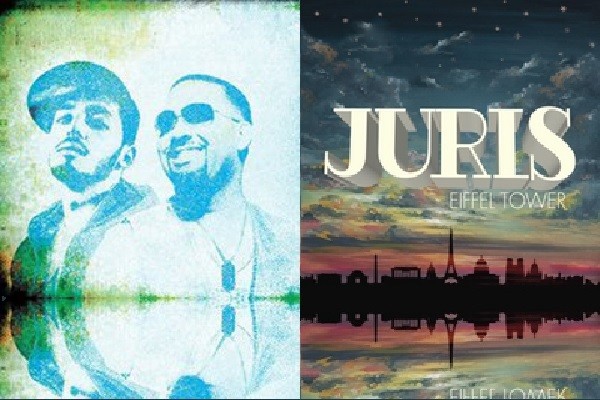 Marcus Johnson joined forces with Young Pulse (of the European group SoFresh Squad and creator of the French remix of Soulja Boy’s “Crank That”) to release FLO Chill: Volume 2. Young Pulse, a smooth urban European producer, journeyed across the Atlantic to join Marcus Johnson, one of the best and brightest contributors to the American contemporary jazz scene to form Juris, a play off on Johnson’s study of law at Georgetown University. This dynamic collaborative effort demonstrates that Juris is ready to raise the bar on the electronic/jazz fusion scene with a brightly hued collection that combines a soulful hypnotic chill with a seductive lounge club pulse. Juris is proud to release their latest project “Eiffel Tower.”
Marcus has released more than fifteen (15) Billboard charted CDs, and has the distinction of having his groundbreaking 2008 Billboard Top 20 Contemporary Jazz FLO (For the Love Of) CDs which consisted of three distinct albums – FLO Chill, FLO Romance and FLO Standards , all charting Top 10 on Billboard Contemporary Jazz Charts simultaneously. Johnson’s previous solo 2007 release, The Phoenix, was widely lauded by jazz critics and aficionados alike and like Johnson’s previous CDs, it peaked in the Top 20 of Billboard’s Contemporary Jazz charts.

It should also be mentioned that Johnson’s next Top 20 Contemporary jazz releases, the unique and multi-faceted Poetically Justified ( 2009) and This Is How I Rock (2011) solidified Marcus Johnson as heir apparent to the George Duke and Herbie Hancock style of funky urban groove music. Creatively, Johnson continues to evolve as an artist. With the recent release of his FLO: Holiday CD and the ongoing collaboration with famed Parisian Producer DJ Pulse – as the musical duo “Juris” – he has managed to maintain his traditional jazz roots, while also remaining on the forefront of the expanding “Euro Jazz” movement. His music continues to enforce and define his musical legacy as a “jazz movement for all people”.

Now, with firm footing in the ever-expanding music world, Johnson has moved on to grow his lifestyle branding company, FLO Brands, LLC, aptly titled For the Love Of ; at its core, FLO began as a musical publishing and lifestyle branding company to house all of Johnson’s musical and entrepreneurial ventures. The scope and reach of the company has expanded and FLO Brands launched FLO Wines, LLC in the first quarter of 2012 with overwhelming success.

Marcus Johnson is a Billboard ranked, NAACP Image Award nominated jazz keyboardist and pianist. He is CEO and Founder of Flo Brands, LLC and Flo Wines, LLC. He is a new dad, daughter Chase was born September 12, 2012 and his world is beyond music, his dreams far-expanding and his conviction beyond belief. He is the embodiment of the renaissance man of the new millennium and his desire to succeed as an entrepreneur is definitive. He is young, brilliant and confident… and believes in the joy of people… giving them what they want from him… For the love of life, self, happiness, passion and joy — Flo Music and Flo Wines… a renaissance statement!

Young Pulse, is a French DJ and producer from Paris. He began spinning records at the age of fifteen and it was not long before he found himself entertaining some of the hottest parties and clubs in the capital of France, such as l’Enfer, Madeleine Plaza, Concorde Atlantique, Back Up, Club Med World, Wagg, Loco, Scala, Chez Régine, Tanjia, and many more.

By the time he was eighteen, Dj Pulse self-educated himself into producing and composing music on computers which led him to meet rappers Kilroy, Killa Daz, and Desmon. Impressed with his sound, they enlisted him as DJ and producer of their band SoFresh Squad, which became later an acclaimed French rap group known for its “Dirty South” sounding. In 2007, SoFresh Squad was signed to Institubes (French label known around the world for electronic music) and released a first CD: “Dirty South Klassiks”. Pulse went on to produce also SoFresh Squad’s albums,”So Net Tape vol.1″ and “So Net Tape vol.2″, which became instant classics of the French Rap.

In 2008, Pulse graduated from the ESRA/ISTS, renowned French school of audio sound engineering.

While having this success with SoFresh Squad, Pulse was contracted by UNIVERSAL MUSIC FRANCE to produce the official French remix of Soulja Boy’s hit single, “Crank Dat”. In addition, he produced numerous tracks for both French and American artists, as his sounds became a reference for mixing rap and electronic music together.

The same year, Pulse created the DJ duet, “Stunts Dj’s” with Dj Orgasmic (of the famous French band TTC) to represent the “Rap” side of the label Institubes, named Stunts. He went on to produce, “Stunts Dj’s” vol.1, 2, and 3 (distributed in Europe) and often performed with other Institubes artists, Dj’s and producers in France and across Europe.

In 2009, he meets renowned American jazz pianist Marcus Johnson (NAACP Image Award nominee and Billboard chart topper) and they decide in 2010 to merge their talents to create a unique duo called JURIS. After only four months, they release their first record together, “FLO Chill Vol. 2: JURIS”, to a worldwide audience. JURIS is a masterful blending of Jazz, Funk, Hip-Hop, and Electronic music, that they decided to call Euro-Jazz and which has already met with praise from critics and audiences alike. In 2011 they release their EP “Flo Pak 1″ and perform a lot in famous Jazz clubs, luxury hotels, big music festivals, all around the USA and in Europe.