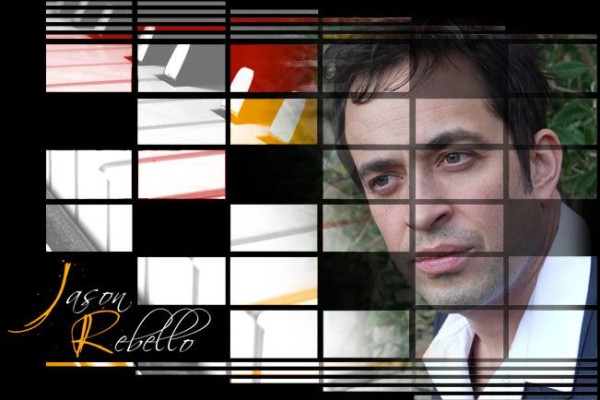 will be Jason Rebello

Celebrated British jazz pianist Jason Rebello was labelled a veteran by critics at 19 and over the next decade won most of the major jazz music awards.
“At 21, he’s probably the most gifted and fluent pianist to emerge in Britain since Django Bates”
Neville Hadsley, Jazz FM 1990
Classically trained but inspired by Herbie Hancock, he came to the attention of one of the founders of jazz fusion, Weather Report’s saxophonist Wayne Shorter. Impressed by his musical fluency and style, Shorter produced his No 1 debut album A Clearer View October 1990 Novus PD 90527.
“…..A Clearer View describes graceful crossover holding patterns, seeking not to challenge but to entertain. Rebello has created a series of compositions where he knows his musicians will be comfortable and can easily express themselves. It’s their shared values of craftsmanship that make this album work”
WIRE magazine 1990
By 1992 Jason’s musical talent and endearing personality enabled him to feature in a wide range of media projects including Artrageous BBC 2 which Janet Street-Porter invited him to present. Popular and confident, Jason chose to produce his second album Keeping Time. He invited a wealth of his musical friends to feature including soul diva Jocelyn Brown and Marianne Jean-Baptiste.
Keeping Time March 1993 Novus 74321 129042
“..It is a brave, open & lyrical record which sees Rebello, now 23, cast his net wider than the Herbie Hancock inspired jazz-fusion which characterised his debut”
Ekow Eshun OBSERVER 1993
Jason undertook a gruelling schedule promoting his own band across the UK and Europe as well as appearing with notable artistes including Bud Shank, Wayne Shorter, Gary Burton, Branford Marsallis, Tommy Smith, Jean Toussaint, Desree, Mica Paris, Carleen Anderson and Omar. He also performed several classical concerts with the Nice Symphony Orchestra and the Halle Orchestra.
“…At the best of times Gershwin’s “Rhapsody in Blue” only hovers on classical music’s borders, but with Rebello as soloist it positively charges back into the world of Jazz. His was a brilliantly executed performance, technically faultless, overflowing with vitality, yet always imbued with a sense of relaxation.”
Oldham Evening Chronicle 1993
Make It Real July 1994 RCA 74321 224082 is Jason’s best-selling album to date. A heady mix of jazz, latin, soul and hip-hop featuring the vocal talents of Maysa Leak, Joy Rose and Cleveland Watkiss and Faithless rapper Maxi Jazz. An inspirational re-working of Gershwin’s Summertime received much radio play and was voted a KISS Classic by KISS Radio. Following a sold out UK tour and European festival dates, The British Council also sponsored a tour of Brazil. The musical partnering of Jason with Joy Rose produced a further album of just piano and voice.
Last Dance May 1995 All That Records 5017771103422
In 1999 Jason travelled to New York to record Next Time Round with his trio featuring Jeff ‘Tain’ Watts and talented British bassist Orlando Le Fleming. The album was a return to acoustic jazz.
Next Time Round July 1999 ONION ONR1003
“…No one has ever doubted that Rebello is possessed of a great pianistic gift – His great technical strengths, delicacy of touch, fluency of execution, a burnished, pellucid tone had been easily and naturally harnessed in the service of a lyrical immediately attractive melody imbued with an affecting, faintly melancholic earnestness”
Chris Parker, ‘The Times’ 1999
Following the untimely death in 1998 of piano legend and personal hero Kenny Kirkland, Jason was invited by Sting to take his seat in the band. Jason recorded with Sting on his Grammy winning album Brand New Day 1999 and Sacred Love 2003. He toured the world as part of Sting’s band for 6 years and on the night of September 11 2001, Jason recorded the live DVD and CD All this Time at Sting’s home in Tuscany.
It was through an introduction from Sting that Jason met guitar legend Jeff Beck. Beck was looking for a new keyboard player to follow Jan Hammer. He was keen to recruit Jason, whose keyboard skills and musical versatility complemented Beck’s love to improvise and experiment in the world of fusion.
Jason once again toured the world as part of Beck’s band for 6 years, and was introduced to the world of Rock music. He worked together with Beck on his 2010 album Emotion and Commotion and co-wrote the single Hammerhead which won a Grammy for Best Rock Instrumental Performance and was voted a Rock Classic by Planet Rock Radio.

Technique, diversity and adaptability have enabled Jason to work with artists across the musical spectrum such as Peter Gabriel, Phil Collins, Pee Wee Ellis, Joss Stone, Madeline Peyroux, Manu Katche and recently Charlene Soraia. In 2007 Jason inspired by family life in Bath embarked on the Jazz Rainbow project. Created as through of a love of teaching and a belief that expression through music is an important part of a child’s development, Jason has worked nationally to promote learning through musical workshops in schools. The project resulted in Jazz Rainbow November 2007 JUMBY RECORDS JRCD1, a charming reinvention of much loved children’s tunes the whole family could enjoy.
Jason continues to teach, lecturing at various schools and music colleges including The Guildhall School of Music and Bath Spa University. He also helped to set up the Jazz Factory at the Wiltshire Music Centre.
“In terms of sheer ability and potential, Jason is probably the finest young jazz musician this country has produced. His playing has great poise and maturity, which is unusual in somebody so young.”
Stuart Nicholson, author Jazz: The Modern Resurgence