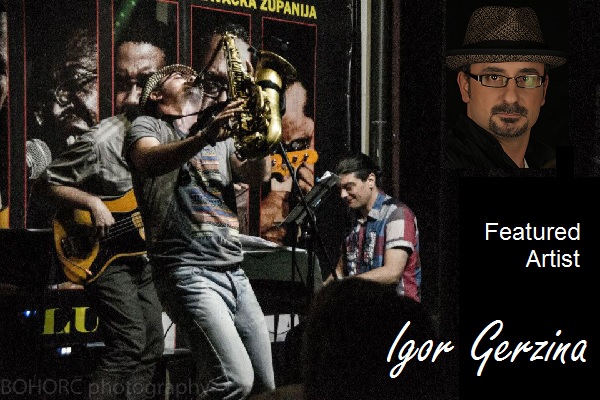 Igor Gerzina is award-winning sax player, composer and the Croatian Radiotelevision Jazz Orchestra producer. He won several Porin Awards (Croatian most prestigious discography award), as well as several Status awards for the best instrumentalist of the year, awarded by the Croatian Musicians Union.

He took part in more than 100 discography editions, composed for film, pop artists and opening songs for TV and radio. He has graduated in saxophone from Zagreb Academy of Music, and has studied at Berklee College of Music (Boston, USA).

From classical music, popular music, jazz, soul, funk, playing in various ensembles from small groups to orchestras, from club music (even playing on the street) to concert and sport halls, in fifteen years of his career, Igor Gerzina has worked with almost all important people on the Croatian music scene. Some of them are known outside Croatia such as: jazz vibraphonist Bosko Petrovic, composer Miljenko Prohaska, guitarist Elvis Stanic, arranger Silvije Glojnaric, etc.

He has participated more than 100 discography releases, around thirty video spots as a sideman, the whole line of television shows and programs, appearances as a guest player in radio shows. He has won many awards, among which are eight Porin awards, five Status awards, Crni Macak award and many nominations. He has also got several awards on State competitions.

His musical beginnings go back to when he was seven years old. His first contact was with the violin with which he won the fourth prize on the state competition. After the second year in music high school, he switched to saxophone and he graduated in classical music in the class of professor Dragan Sremec at the Music Academy in Zagreb.

During that period he participated in several courses by the famous classical saxophonist professor Claude Delangle (CNSM, Paris). Being an accomplished student, he was given the opportunity to perform as a soloist accompanied by the Zagreb Philharmonic in the Concert for Saxophone and Orchestra by Pavle Despalj. The performance was conducted at the Croatian Music Institute by the maestro Despalj himself.

After his graduation, he won the scholarship by the Berklee College Of Music and he specialized under Bill Pierce (Art Blakey & Jazz Messengers) and Frank Tiberi (Woody Herman Big Band). In the USA he met the croatian jazz guitarist Elvis Stanic, who he later worked with on two discography projects.

Since he returned to his homeland he has worked with the whole string of ensembles, especially with the singers of popular music. He has also worked as a studio musician and composed.

Occasionally, he has also worked with the musicians outside Croatia, as for example, the former lead singer of the group Tower Of Power, Hubert Tubbs.

He writes compositions for the vocal singers, music for the Croatian movie “Five minutes of tenderness”. He also started his own band. They published two albums, around ten video numbers and they were nominated for the Porin award.

He was the leader of the bands in TV shows on National television and some other local TV networks. He has made many jingles and for TV and radio shows.

Since 2003, as a permanent member of the Croatian Radiotelevision Jazz Orchestra, he has worked with many names on the jazz scene, he has taken part in studio recordings, concerts, TV shows and since 2009 he has been composing and making arrangements for the orchestra. The composition Bionicle for the Croatian Radiotelevision Big Band  was performed on the concert “Selected compositions by Croatian composers” which was transmitted alive by the European Broadcast Union (EBU).

Igor Gerzina released four solo albums, one of which ‘Sax Album’ was nominated for the Porin award in two categories, and one composition was used as a musical theme for TV series.

Fourth solo album ‘One Click World’  is ‘Album Of The Month’ on Smooth Jazz Appreciation Society. Composition ‘Can’t Stop The Train’ is in ‘Top Twenty’ choice and ‘Counting Stars’ cover is in ‘Top Ten’ choice for 2013 on Smooth Jazz  Therapy.