Heston at the Jazz Cafe Camden 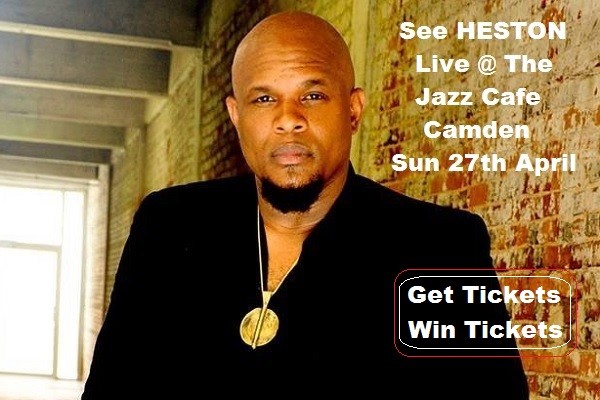 The Tickets have been Won –

You can still buy using the link below:

Check out the Official Site below for Tour Dates in the UK and Ticket Sales and more….

He has been compared to legendary artists such as Marvin Gaye and Leon Ware for his honesty and musicality.

Heston possesses one of those rare, “instant classic” voices laced with confident sensuality – nostalgic, yet very much his own style.

This Dominican born, Atlanta based, ‘Love Junkie’ is a hot-blooded man, unabashedly romantic, allowing listeners to enter his most intimate spaces and thoughts.  With his polished voice, passion for delivering stellar music, and loyal and growing fan base, Heston is poised to make a legendary impact on the music world.

Heston is a perfectionist and he defines his journey as a full-time musician, composer, songwriter and producer. The precision of his musicality both on his albums and love is unparalleled in this day and time.

Heston lives and loves great music.  His music is accompanied by a full band with foundational rhythms that stem back to his island roots, comprised of percussions, horns, acoustic and electric guitars, leaving audiences captivated.

This Soulful Gentleman mesmerizes his audiences all over the World, including Paris and London and is soon to steal his Australian Fan’s hearts, as he heads to Brisbane, Sydney, Melbourne and Perth for The Love Junkie Tour Australia, in October 2013.Heston

“Creating timeless music has always been my ultimate goal,” says Heston with a poised, yet humble demeanor. “I want to leave the world with music that can be played for a lifetime.”