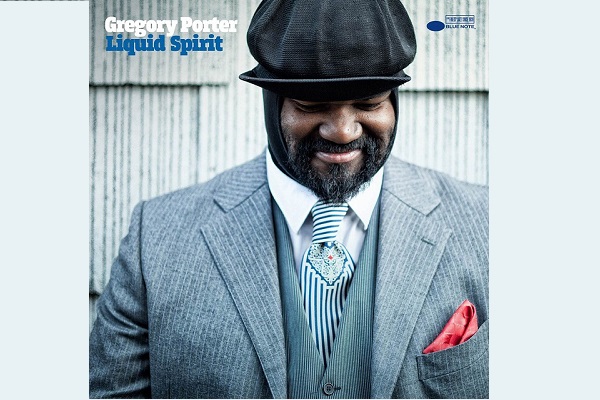 “Porter fuses jazz and soul better than anybody working these days… We are only one month into 2012 and we may have already heard the album of the year. Very Highly Recommended.”    – SOUL TRACKS

“The ’70s soul is still quite apparent in his voice, with shades of Donny Hathaway and Bill Withers, but he’s also the vocal heir to Nat King Cole…a major talent, not just as a singer but also as a composer, with a unique, elliptical style, both for melodies and lyrics…”  – ALLMUSIC.COM

At the start of 2010, the buzz about Los Angeles-born and now Brooklyn-based jazz/soul vocalist Gregory Porter was a strong, steady murmur, fueled by a growing crowd of fans who’d caught his performance in the Tony and Drama Desk Award-nominated Broadway hit, It Ain’t Nothin’ but the Blues, or his weekly stints at the Harlem club, St. Nick’s Pub.

By the end of 2012, with his second CD, Be Good, having earned a Grammy®- nomination for Best Traditional R&B Performance, the buzz had built to a roar, with the incredible accolades showered on Porter showing no sign of decreasing either in volume or enthusiasm.  As the year drew to a close, Porter’s music topped an extraordinary number of “Best of 2012” lists in the US and the UK, including NPR’s “Best Music of 2012” and “100 Favorite Songs of 2012”; iTunes “Jazz Album of the Year”;  and Soul Train’s “Top 10 Albums of 2012”. Be Good was also named Soul Tracks’ “Album of the Year.”

Based on the groundwork laid by the volume of positive critical and public response to his ‘Best Jazz Vocal’ Grammy®-nominated debut CD, Water (2010), Be Good met out of the box success.  The track “Real Good Hands” was selected by iTunes as its Single of the Week, propelling the track to the #1 position on iTunes jazz chart for several weeks, and sending it soaring into the Top 100 overall album chart the first week of release.  Another track from the album, “On My Way to Harlem” was selected by the Starbucks Digital Network as its Pick of the Week.

In the ten months since its release, Be Good ranked up an impressive showing on both US and international charts.  In Billboard, the album reached #6 on the Jazz Album chart and #12 on the Heatseekers chart.

Be Good’s US chart success is mirrored around the globe.  In the UK, it reached #2 on the Indie Album Breaker chart and #15 on the Official Indie Album Chart.  In Germany,Be Good’s chart position is even more impressive, clocking in at #1 on  Amazon’s jazz chart (and #20 on Amazon’s overall chart) for digital sales, #10 on the Amazon’s jazz chart for CD sales, and at #5 on the iTunes jazz chart (with Water sitting in the #10 slot on that chart at the same time.) In addition to its debut at #1 on the US iTunes chart, Be Good soared to the top slot on iTunes Jazz album chart in the UK and Norway and to #10 on Norway’s iTunes Top Album chart.
The international success of Be Good, supported by extensive touring throughout Europe resulted in the album being honored with an Edison Award, the Dutch equivalent of a Grammy® .

Since Be Good’s February release, the CD has drawn critical raves from the likes of Soul Tracks, who declared, “Porter fuses jazz and soul better than anybody working these days… We are only one month into 2012 and we may have already heard the album of the year. Very Highly Recommended.”    The site also ranked Be Good as the #1 CD, based on Amazon sales, for February, the month of its release.

In its four and a half star review of Be Good, Downbeat stated, “In addition to Porter’s superb songs—many of which have the potential to be this century’s new jazz standards—Be Good comes alive because of the accord he ignites with his band members…Be Good signals the arrival of a great jazz artist with long range staying power.  A major jazz talent… A must-have disc.”  With high praise such as that, it’s no wonder that Porter scored the #4 spot in the 2012 Downbeat Readers Poll.

The year also found Porter gracing the cover of numerous magazines, including Jazz Inside, and France’s Jazz Magazine and L’Express, which lauded him as ”the next great voice in Jazz.”  In its recent cover feature, the UK’s Jazz Wise Magazine, extolled his talents, stating,   “On Be Good, Porter has crafted a work that not only meets, but seems to be primed to surpass, the heightened expectations of the jazz and soul audiences eagerly awaiting his follow up to Water. Featuring Porter’s winning combination of “outstanding original songs, erudite lyrics and social comment, top drawer musicianship and improvisation, and a voice to die for.”

Porter was also profiled in The Wall Street Journal, Jazz Times and the UK’s Echoes and Blues and Soul, and the album was reviewed by some 50 online and print outlets around the world, including the Huffington Post, BBC Music Magazine, The London Times, The Guardian, and the Irish Times.

Be Good is a musical compendium of groove-driven delights, ranging from quiet ballads to up-tempo burners, from romantic charmers to powerful, blues-tinged anthems.  Porter is surrounded by the core of his powerhouse working band, with whom he recorded his Grammy®- ®- nominated debut, and who have performed with him for over three years now: Chip Crawford on piano, Aaron James on bass, Emanuel Harrold on drums, and Yosuke Sato on alto sax.  Under the sure hand of producer Brian Bacchus (Cassandra Wilson, Norah Jones, Joe Lovano, Randy Weston, etc.), Porter and the band rise to new heights on Be Good, further fueled by richly emotional horn arrangements by the CD’s associate producer and musical director, Kamau Kenyatta.

A disarmingly sincere performer, with a groove that never quits, a voice of incredible virtuosity and a seemingly universal appeal as a songwriter, Porter’s lyrics often speak as dreams do, in the languages of image and emotion, to communicate thoroughly though not always directly.  His objective as a songwriter, he says, is “to create a sincere message about my feelings on love, culture, family and our human joys and pain.” Even in conversation he leans toward the poetic: “Just like the song ‘Painted on Canvas’ says, ‘I’m ‘made of the pigment of paint that is put upon’ …trying to be honest and organic in my colors that I show.” Be Good clearly attains that goal, and also proves to have a wide palette of colors to show.

The CD’s opening track, the song mentioned above, masterfully primes the canvas of Porter’s sophomore release.  Gentle as a bedtime story-teller, his vocals weave seamlessly in and around the warm tones established by his core band, enhanced by the sparkling threads of Kamau Kenyatta’s tenor sax and Chip Crawford’s impressionistic pianism.  “Be Good, (Lion’s Song)” (the leading single from the album) has been a favorite at Porter’s live shows for some time, here finally making its much-anticipated recording debut.  The upbeat tribute “On My Way to Harlem” percolates with the vibrant cultural energy of the Harlem renaissance figures that once walked the streets near St. Nick’s Pub, where Porter’s working band came together and where he finally solidified his conviction to record his first record in 2010.  “I grew up in California and now I live in Brooklyn,” explains Porter, “but even so, I feel that the spirit of the artists that came out of Harlem – from Duke Ellington to Langston Hughes – has so influenced my work that Harlem is as much a part of me as if I had lived there.”

The soulful spirit of the ‘70s, epitomized by such artists as Lou Rawls and the Chi Lites, echoes forth in style on Porter’s “Real Good Hands,” a track that makes it clear that Porter is a complete romantic at heart. On the intriguing ballad, “The Way You Want to Live,” a song of dangerous personal choices that he dedicated to Amy Winehouse during a performance at the Blue Note in New York just days after her untimely death.

Some critics are inspired to comment on Porter as a new “king’ of jazz,” and a “leader of the pack,” a performer of extraordinary presence who has been compared with the greatest of the greats, such as Joe Williams, Nat Cole, Donny Hathaway, and Marvin Gaye.  As musically solid as his recordings are and as powerful and honest as Porter’s magnificent voice is, it may just well be the brilliance of his poetry and the unguarded depth of his emotional delivery that is most fueling his rapid rise to fame.

Porter is quick to point out that he is more painter than photographer.   “My songs may start from a place of personal experience,” he explains, but he uses his poetic license freely. “I try not to impose any particular perspective on the music.  I want listeners to be affected each in his or her own way, and moved as much by what can be read in between the lines as what the lyrics say.”