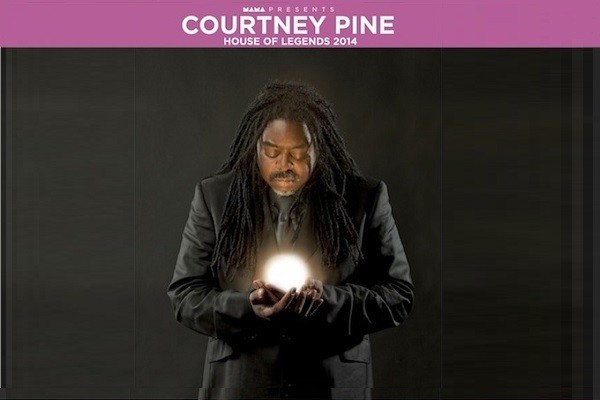 JAZZWISE ALBUM OF THE YEAR

The Independent; 5 stars…”“ Courtney Pine was once hailed as British jazz’s saviour….he still is”

The Observer:  4 stars…“Pine is on scalding improvisational form”

Evening Standard:  4 stars/ Jazz CD of the week…”an exceptional labour of love. Never has his intense power been deployed with greater focus”

No musician more embodies the dramatic transformation in the British jazz scene over the past twenty + years than Courtney Pine C.B.E. The ground breaking, multi- instrumentalist has led a generation of exciting and innovative players who have broadened their styles to take jazz out to a wider audience.

Fresh from sell out shows across the US,Canada and Europe, headline slots at Bestival, Love Supreme and Greenbelt Festivals here in the UK, Courtney in back touring his critically acclaimed House of Legends set. This, his 15th studio album to date sees Courtney return to the instrument he is best known for – the Saxophone and features his soprano sax exclusively for the first time.

Deeply steeped in the traditions of the Caribbean, this very personal project  sees Courtney on top form, bringing together musicians from Africa, the Caribbean and Europe for vibrant exchanges that tell tales of life from a truly multi-cultural view point.

Expect an exhilarating mix of Merengue, Ska, Mento and Calypso as played through the lens (saxophone) of a UK born artist with strong, proud Afro-Caribbean roots.

Jazzwise: 4 stars….“Unquestionably one of the most joyous albums Pine has ever made, it’s just brilliantly effective dance music” ALBUM OF THE YEAR 2012

The Financial Times-: 4 stars….“Pine, brimming with energy, spins his sinewy lines on soprano sax throughout, his tone as forceful and focused as the project demands”

The Arts Desk:  4 stars…“Pine has delivered one of the finest album’s in his already well-stuffed discography (definitely my earworm of the year)”

The Scotsman: 4 Stars… “A joyous, dance-inducing celebration of his Afro-Caribbean roots”

Echoes : 4 stars…“Intensely moving, one of Pine’s most complete statements to date, both as a musician and member of a society in a state of flux” …

The Voice….”There have been many pioneers in the black British community – people who have defined an era, changed societal perceptions and made it easier for those who follow to progress in their field.  Courtney Pine is such a trailblazer”

(LINE UP CAN BE SUBJECT TO CHANGE)