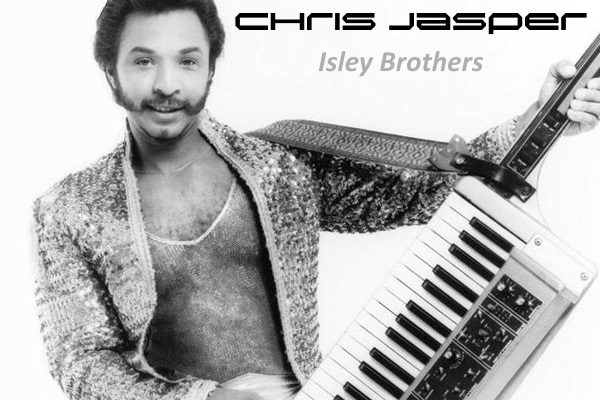 for the Breakfast Show

If you are familiar with THE ISLEY BROTHERS, then you know Rock & Roll Hall of Fame inductee, CHRIS JASPER, an integral member of THE ISLEY BROTHERS during the 1970s and 1980s—their gold and platinum years—from the 3+3 (1973) to Between the Sheets (1983) albums. These were the years when THE ISLEY BROTHERS were a self-produced, self-contained group.

If you are familiar with THE ISLEY BROTHERS, then you have heard the music of CHRIS JASPER, who was primarily responsible for writing, arranging and producing all of THE ISLEY BROTHERS music during this time, including such beautiful love songs as “For The Love of You” and “Between the Sheets” and uptempo funk such as “Fight the Power.” His arrangements and instrumentation as a classically-trained musician, and his expertise on the keyboards and synthesizers, are the foundation of the legendary “Isley Brothers Sound.” When the six members of THE ISLEY BROTHERS disbanded (1984), Marvin and Ernie Isley joined CHRIS JASPER and formed ISLEY-JASPER-ISLEY. Without this crucial musical component, THE ISLEY BROTHERS were no longer a self-produced, self-contained group.

CHRIS JASPER brought his “unique sound” and musical talents to ISLEY-JASPER-ISLEY, and topped the charts singing lead vocals on “Caravan of Love” (1985), a song that was covered by English recording group, the Housemartins, an international #1 pop hit. “Caravan” was also used in commercials as part of a Dodge Caravan advertising campaign. He was also awarded a CEBA Award For Excellence for a Miller Brewing Company commercial. The music for that commercial formed the basis for “Brother to Brother” from the “Different Drummer” album, which supported the anti-apartheid struggle going on in South Africa at that time. His music has also been used in radio and television commercials, including “Who’s That Lady” (Swiffer) and “Between The Sheets” (L’Oreal).

When ISLEY-JASPER-ISLEY disbanded (1987), CHRIS JASPER brought his “unique sound” to his own solo projects, topping the charts with “SuperBad,” a song promoting the value of education.  CHRIS JASPER has continued to write songs and produce his own R&B and Gospel music, as well as other artists, for his independent record label, Gold City Records.

CHRIS JASPER’s music has been covered and sampled by hundreds of new and established recording artists, including Whitney Houston, Jay-Z, Snoop Dogg, Gwen Stefani, Fantasia, Will Smith, Alliyah, Queen Latifah, Notorious B.I.G., Tupac, Natalie Cole, Jaheim, Kendrick Lamar, and the list goes on and on.  His music has also been used in many movie and television soundtracks.

In 1992, CHRIS JASPER, along with the other members of THE ISLEY BROTHERS, was inducted into the ROCK & ROLL HALL OF FAME and in 2014, received a GRAMMY LIFETIME ACHIEVEMENT AWARD. In 2015, CHRIS JASPER received the German Record Critics Lifetime Achievement Award (“Preis der deutschen Schallplattenkritik”). In 2016, Chris was awarded the National R&B
Society Lifetime Achievement Award.

Chris Jasper was born in Cincinnati, Ohio on December 30, 1951, the youngest of seven siblings. While growing up in Cincinnati, Chris studied classical piano starting at the age of 7 years old. After graduating from high school in Cincinnati, he moved to New York to study music composition at the Juilliard School of Music.

Chris received a Bachelor of Fine Arts degree in music composition from C.W. Post College in New York, where he studied under noted jazz pianist and composer, Dr. Billy Taylor. He subsequently received a Juris Doctorate degree from Concord University School of Law.

While temporarily living in New Jersey as a teenager, Chris and the two younger Isley brothers, Marvin and Ernie, formed a band, “The Jazzmen Trio”, that played locally in New Jersey. Chris played keyboards, Ernie played guitar and Marvin played the bass. Along with Chris, Ernie and Marvin also attended C.W. Post College in New York. While in college, Chris, Marvin and Ernie played on the older Isley Brothers recordings, including “It’s Your Thing”.

In 1973, Chris, Marvin and Ernie brought the songwriting and musical component to the older brothers vocal trio, making The Isley Brothers, a self-produced, self-contained six-member group. Their debut release as a 6-member band on their CBS-associated label was the 3+3 album.

Although all 6 members of the Isley Brothers are credited as songwriters of the music from the 3+3 era, this was a business arrangement and does not reflect the creative reality. Chris was the primary songwriter, producer and arranger of The Isley Brothers music from 1973 (“3+3”) through 1983 (“Between the Sheets”), with contributions by younger members Ernie and Marvin Isley. Chris’s arrangements and instrumentation as a classically-trained musician, and his expertise on the keyboards and synthesizers, have been credited as the foundation of the legendary “Isley Brothers Sound.” In 1984, the 6-member group disbanded due to internal problems.

In 1984, Chris, Marvin and Ernie formed Isley-Jasper-Isley, a self-produced, self-contained trio, with Chris as the lead singer of the group, continuing his role as the primary songwriter, producer and arranger. Isley-Jasper-Isley recorded 3 albums on their CBS-associated label, and earned recognition with their #1 hit, “Caravan of Love”. “Caravan” was covered by English recording group, the Housemartins, who made the song an international #1 hit.

In 1987, Isley-Jasper-Isley disbanded and Chris embarked on a solo career. Chris formed his record label, Gold City Records, and released two albums as a CBS-associated label. His debut single, “Superbad” reached #1 on the R&B charts.

Eventually, Marvin and Ernie returned to record under the Isley Brothers group name, and Chris continued his solo career, releasing a total of 14 solo albums to date, including 4 urban contemporary gospel CDs.

Chris has also produced a number of artists for his Gold City label, and has worked with such notable artists as Chaka Khan, writing and producing a song for her CK album (“Make It Last”). Chris’s music has been covered and sampled by numerous new and established recording artists, including Whitney Houston, Jay-Z, Snoop Dogg, Gwen Stefani, Fantasia, Will Smith, Alliyah, Queen Latifah, Notorious B.I.G., Tupac, Natalie Cole, Jaheim, Kendrick Lamar, and the list goes on and on.

Chris works closely with his 22-year old son, Michael Jasper, who released his debut album “Addictive” on the Gold City label at the age of 16 in 2010. “Addictive” was written and recorded by Michael, and co-produced by Chris. Michael’s recently released a single “Make It” from his forthcoming CD “Dreams” which is scheduled for release in 2016. Chris and Michael are currently working on a film score to an original screenplay by Michael Jasper.

Chris has received numerous gold and platinum albums and music industry awards, including the BET lifetime achievement award. In 1992, Chris, along with the other members of The Isley Brothers, was inducted into the Rock & Roll Hall of Fame and in 2014 received the Grammy Lifetime Achievement Award. In 2015, CHRIS JASPER received the German Record Critics Lifetime Achievement Award (“Preis der deutschen Schallplattenkritik”).

Chris and his wife of 33 years, Margie, live in New York.