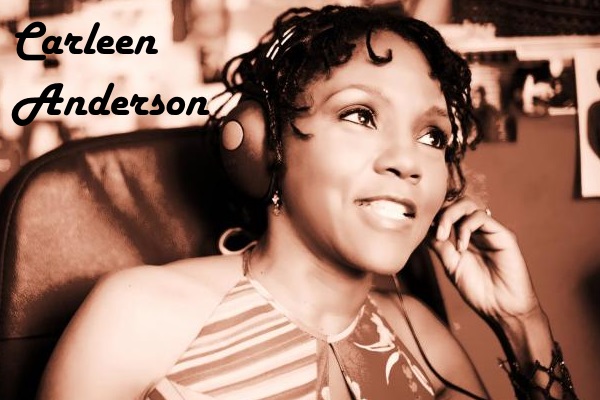 Anderson was raised by her paternal grandparents, David Sr. and Alberta Anderson, in Houston, Texas, during the civil rights movement in the 1960s. Pastor Anderson’s Pentecostal church was located in the Fifth Ward, Houston, populated by working class African-Americans, many of whom were migrant sharecroppers, and their descendants, from Louisiana. By the time Anderson was 3 years old, she was singing solos in front of the congregation. By the age of 7, Anderson was playing piano by ear, directing the church choir and writing church songs every week for the choir to sing before her grandfather would deliver his Sunday sermons. The gospel music atmosphere was enhanced by Anderson having the benefit of her Aunt Betty Faye Anderson, soprano soloist for the Chicago Symphony Orchestra. Her Uncle, David Anderson Jr., and his daughters, Pamela and Jhelisa, along with their mother, Yvonne, had a very successful family gospel singing group that travelled the southern US states. Anderson’s birth father, Dr. Reuben Anderson Sr., is pastor of the Tower of Faith Evangelistic Church of God in Christ, in Compton California. Her mother is soul singer, Vicki Anderson who featured with James Brown during the 1960s and 1970s. Vicki Anderson (birth name, Myra Barnes) married Bobby Byrd (soul singer and childhood friend of James Brown) who formed a group with James Brown in the late 1950s called The Flames, which was later named, James Brown & The Famous Flames. After a brief marriage, Anderson gave birth to a son, Bobby Anderson, in 1979. After the divorce, Anderson lived as a single mother in Los Angeles where she received several scholarships to study classical and jazz music performance, as well as music education, at Los Angeles City College (LACC) and the University of Southern California (USC). Anderson also studied Creative Literature at the University of California in Los Angeles (UCLA). During her studies, Anderson worked as a student tutor for extra income to support herself and her child. Anderson’s goal at the time was to become a music school teacher, but her plans were thwarted when President Ronald Reagan took music out of the curriculum in the government-sponsored schools. With only one semester left before completing her music degree, circumstances caused Anderson to take office-clerk jobs to make ends meet. In a 2005 Echoes magazine interview, Anderson says that a career in music performance was not at all on her agenda at that time.

The following summer, after her Godfather, James Brown, was incarcerated in 1988, several artists from the James Brown Show toured worldwide as ‘Bobby Byrd and the JB All Stars’. It was the summer of 1989, and Anderson was asked to join the tour as the opening act. She saw this as an opportunity to have a ‘working’ holiday in Europe with her son. With her brothers Bartlett Anderson on keyboards and Tony Byrd on drums, they continued touring with the collective until 1990. Whilst on the road, Anderson was the understudy for Vicki Anderson, Marva Whitney, Lyn Collins and Martha High, with additional tutelage by Maceo Parker, Pee Wee Ellis and Fred Wesley.

Anderson met Marco Nelson and Femi Williams, who later formed the Young Disciples, on this tour with Bobby Byrd and the JB All Stars. Her first London performance of Denise William’s Free at the then Town and Country Club (now, the Kentish Town Forum, also known as the HMV Forum) so impressed the UK natives that DJ/bassist/music producer Marco Nelson and DJ/music producer Femi Williams suggested Anderson move to England to start a singing career. This was the first time Anderson even considered such a path, and it took some convincing. She was swayed when told she could get steady work as a session singer and a songwriter. Ultimately, Anderson was motivated by the positive impact she felt raising her son in the UK would have on his life, as she could sense the violent turbulence brewing in her son’s birth town of Los Angeles, where they had lived for 10 years. In a 1998 Pride magazine interview, Anderson describes how she received much resistance from family members regarding to her relocating to the UK. However, the Rodney King riots that exploded soon after Anderson’s expatriation were proof, as far as she was concerned, that her decision to move was the right thing to do.

Upon relocating with her son to the UK in the summer of 1990, Marco Nelson and Femi Williams introduced Anderson to the stirring UK underground music scene, which (for lack of a better name) was called Acid Jazz. Anderson sang lead and background vocals on a variety of music products in that season, including collaborations with Paul Weller, Bryan Ferry, Galliano, Guru and Courtney Pine, as well as recording under the assumed name of Mardou Fox for several ‘white label’ releases for record producer, Eddie Pillar. Also in 1990, Gilles Peterson and Sir Norman Jay (both top UK-based internationally acclaimed DJs) were elected by the Talkin’ Loud record label to recruit new music acts. Peterson, Jay, Nelson and Williams already had a bond as fellow DJs, resulting in Peterson and Jay signing the Young Disciples. Marco Nelson’s alliance with Paul Weller, gave the Young Disciples the advantage of recording in Weller’s Marble Arch-located Solid Bond studio, where they recorded their album, Road to Freedom. The single release, Apparently Nothing, gained critical and commercial acclaim. Nelson and Williams focused on the production aspects of the music, shunning the promotional tasks required for marketing the project, which meant Anderson was courted by several record companies to pursue a solo career. This friction divided the musical group. With her priority as a single mother to provide a secure future for her son, Anderson felt her best option was as a solo artist. In an October 2011 Jazz FM radio interview with BBC presenter, Jumoke Fashola, Anderson states that a solo music performance career, up until that time, had been the furthest thing from her mind.

Through her association with the Young Disciples, Anderson met Ashley Newton, the then Circa label head, who later joined the Virgin Records music company. Amidst the variety of record companies vying to sign Anderson at the time, it was this previous meeting with Ashley Newton that led Anderson to sign with Virgin Records. Her first album was preceded by the marketing EP Dusky Sappho in 1993. The album True Spirit, released in 1994, had pop chart success with single releases Mama Said and Nervous Breakdown. Anderson wrote most of the songs on the album with some songs co-written with producer, Ian Green. Another single lifted from the album that charted well was Let It Last, co-written with Mark Nevin of Fairground Attraction. The album was nominated for a Best International Newcomer BRIT Award, in 1995. Anderson sang on the Red Hot Organization’s compilation album, Stolen Moments: Red Hot + Cool, released in 1994 to promote awareness of the HIV epidemic in the African-American community. The album included numerous stellar artists and was heralded as “Album of the Year” by Time magazine.

Anderson’s second solo album, Blessed Burden, released in 1998, was co-produced by Paul Weller. Anderson again wrote most of the songs with some co-written with Weller and a few covers. Weller supported Anderson in her creative extension, but the Virgin record company executives became disenchanted by the new direction of Anderson’s live music recordings, as they were in such direct contrast to the sampling and drum looping production techniques acquired from Anderson’s Young Disciple days, which were used as a format for her True Spirit album. Subsequently, Virgin dropped Anderson after the Blessed Burden album.

Whilst touring with the Brand New Heavies, Anderson formed a friendship with saxophonist, Ben Castle, son of the famed trumpeter, Roy Castle. Castle encouraged Anderson to continue her solo career via the independent route and provided the means for her to release her first independent album, Alberta’s Granddaughter, in 2002, for which Anderson received a variety of favorable press reviews. The one single release from that album, a cover of Noel Gallagher’s Don’t Look Back in Anger, was a highly praised featured performance on her 2004-2005 tours with Courtney Pine’s British Council sponsored European events.

In 2003, Ben Castle suggested the production skills of Mark Edwards and the engineering expertise of Colin Walker, alongside filmmaker, Tim Johnson and Andy Hutch, to record Anderson’s performance at the Glee Club in Birmingham, England. Live CD/DVD gaining critical media acclaim from magazines Mojo, Blues & Soul, as well as from the BBC.

These acknowledgements led EMI to release a ‘best of’ Carleen Anderson CD, entitled, Up To Now: The Best Of, in 2004, which included a variety of popular and rare performances across the length of Anderson’s career.

In 2005, UK based, Dome Records, released Anderson’s Soul Providence CD, also co-produced by the Ben Castle, Mark Edwards and Colin Walker team. Soul Providence was composed entirely of Anderson’s self-penned songs, save for one, a cover of Leon Ware’s Wanna Be Where You Are. Anderson recorded this song first made famous by the Jackson Five in 1971 as a duet with Paul Weller. Another duet on Soul Providence is with Jocelyn Brown. Soul Providence was praised by Blues & Soul magazine, as Anderson’s best body of work since her Young Disciples days.

In 2006, Anderson sang at the Stables, the music forum established by Sir John Dankworth and Dame Cleo Laine. In the introduction for Anderson to sing with Sir John Dankworth and his band, Dame Cleo Laine’s enthusiasm sparked the interest of the Ronnie Scott’s promoter who was in the audience. Since then, Anderson continues to have sold out audiences at Ronnie Scott’s with residencies over several nights. A Live at Ronnie’s recording was made in 2010, but the release was delayed due to the tragic loss of the Ronnie Scott’s house drummer, Chris Dagley, who was on the performance and died in a motor accident a few months after the recording. As the club and the band recover from the shock of their much loved and valued band member, they plan to release the Live at Ronnie’s CD, in 2012.

Anderson’s vocal music also appears in the 2006 film, The Fall.

From 2002 to 2007, Anderson taught vocal music at the Brighton Institute of Modern Music, where she was also Head of the Vocal Department. This association, led to the connection with theatre promoter, Julian Boast, who arranged for Anderson to sing for and meet HRH Queen Elizabeth at the Theatre Royal, Brighton, in 2007. In her 2010 interview on Paris TV show, One Shot Not, Anderson speaks of her initial plans to be a music teacher, without any consideration of ever having a career in music performance.