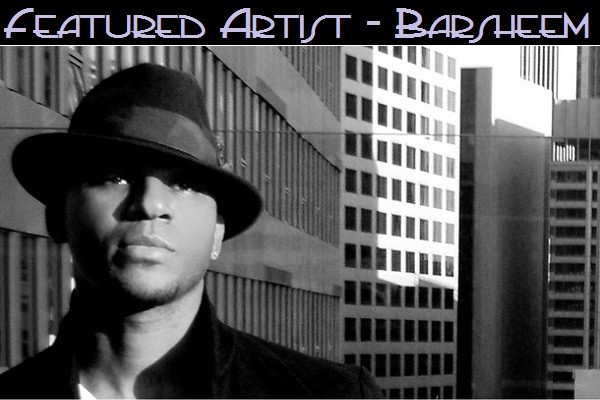 Barsheem is a singer, songwriter, arranger and producer. His sound derives from soul, pop, r & b and jazz. His influences are Marvin Gaye, Billie Holiday, Miles Davis, Tony Bennett, Prince and Michael Jackson to name a few.

Born and raised in Brooklyn, New York, Barsheem grew up in a home where the sounds of Motown played non-stop. His fondest memory is hearing Just My Imagination by The Temptations for the first time and learning every lyric and harmony. His sister Felicia encouraged his singing by having him sing background for her as she sang songs from the radio. She would also introduce him to the music of Babyface who Barsheem studied and learned how to write meaningful and unforgettable lyrics. As a teenager he began doing the talent show circuit for a while but decided to take a leap of faith to Los Angeles to further his career. During this time Barsheem landed auditions and booked two episodes of NBC’s “American Dreams” where he played Stephen Caldwell, the only male member of the “Don’t Hang Up” quartet The Orlons. He was later chosen to play the leading role in yet another episode, as Bobby Freeman doing his hit song “Do the Swim”. Barsheem’s feature film debut as part of the group, Little Albert and The Tru Tones in the major motion picture “Dreamgirls” gave him a chance to see what filming a movie entailed. Ironically all of these roles required him to be that crooner with a classic sense of style that he naturally embodies.

In 2011 Barsheem set out to record some music of his own. He began writing material starting with a simple yet beautiful love song entitled No One while working with producer Tauros Music, the two recorded and released “No One” to social networks with an overwhelming response. This fueled their passion to start work on a full album entitled WHAT IS TO BE MAJOR. The independently produced and recorded 13 song album focuses more on Barsheem’s captivating vocal styles rather than hard hitting beats. The goal was to create the kind of music Barsheem was inspired by. Over a two year period they released fan favorites like the mid tempo love song NOW, a re-imagination of the Marvin Gaye and Tammi Terrell classic If This World Were Mine, a song that focuses on racial equality and the pursuit of happiness called (White World, Black World) Find Happy and the mid tempo groove record, “Need You In My Life”.

In 2013 “(White World Black World) Find Happy” and “If This World Were Mine” got the attention of Marvin Gaye’s family by way of his twitter account. Janis and Nona Gaye fell in love with Barsheem’s sound and invited him to Washington DC to perform at Marvin Gaye’s 74th Birthday Celebration. Barsheem was overjoyed that he could participate in a celebration of his idols life. Riding high on that wave, Barsheem released a free 5 song EP to his supporters entitled “A Major EP”, a prelude to his debut which is gaining numerous radio station adds and lots of attention on the music blogs. With the entire album now complete Barsheem is excited to perform and present his new music to you and the world.