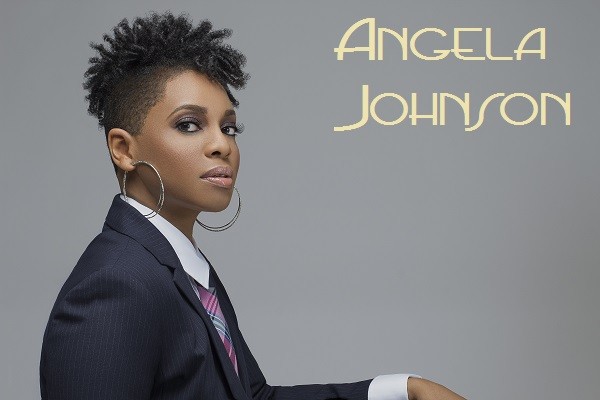 Is the fantastic “Angela Johnson“

“I want music to open something within me, to touch something few have seen, or reach something intangible in you…This is the record I’ve worked the hardest on. A lot of blood, sweat, and tears went into this project. I never thought I could be pushed this far as a producer, singer, songwriter, and arranger. There was so much relying on me, and to see how it came forth; I am so proud of it. I really went outside the box with this album. I don’t want to say this is my masterpiece, but if I died tomorrow this would be it. This was the record I’ve longed to make.”  — Angela Johnson

Something magical happens when a woman arrives and stops being afraid of the resonating fullness of her power and the potential impact of her voice. It can take a while for it to happen, decades even. But, when that internal click happens, that freeing moment in her life when she embraces the magnificence of her flawlessly flawed mind, body, and gifts, new levels of inner peace and creativity are achieved and it’s a thing of wonder to behold. After nearly 20 years in the music industry, such a moment has finally happened for triple threat singer/songwriter/producer Angela Johnson, the First Lady of Purpose Music Group. No longer the girl next door or the superwoman who thought she had to be super to be extraordinary, here is Angela Johnson unfiltered, unvarnished and definitely un-bossed. The title of her sixth solo album, Naturally Me, says it all. With the exception of Angela’s cover of Teena Marie’s Déjà Vu,  Johnson wrote, composed, and produced every single song on this intimate ten-track release. Throughout, Johnson is a woman claiming her power and sharing her thoughts and feelings about matters of serious import, from politics and social injustice to motherhood and relationships of the real, not manufactured kind. Honest and direct, Naturally Me is a portrait of an artist fully realized, at last.

“I’m voicing my opinions about things that I think are wrong in the world today. I’m being more political, talking about what’s affecting my family and community. I’m putting myself out there, even though I’ve been afraid to.I wanted to talk about things that are relevant that many people aren’t talking about,” says Johnson.

Not that Johnson was ever shy when it came to music, a path she’s always taken seriously. Playing piano by age four, violin by nine, and rocking the church as an organist, choir director, and featured performer by adolescence, the Utica, NY native went quickly from teenage Baptist phenom to the high school musical star of such local shows as Godspell. The eldest of four, Johnson’s family encouraged her formative years as an aspiring musician through college and beyond. Upon enrolling at the State University of New York at Purchase (SUNY) to further her study in violin, Johnson soon met her future Cooly’s Hot Box bandmates and writing partner, Christian Urich. Together the eclectic soul and acid jazz band landed an all-too-brief deal with Polygram Records, despite a trifecta of international dance hits (“We Don’t Have To Be Alone,” “What A Surprise,” and “Make Me Happy”). Nonplussed, Johnson and the group inked a subsequent deal with Virgin Records in 2002 and released the band’s critically acclaimed debut, Take It. Leaning in before the concept gained currency, Johnson decided to express her independent artistic vision distinct from Cooly’s and simultaneously recorded her solo debut, They Don’t Know (Purpose),while also contributing to the songwriting and production of Take It. They Don’t Know and its radio hit “Ordinary Things” did what Johnson had done since being that big-voiced child behind the organ keys, distinguished herself as a woman apart.
That distinction paid off as songs from They Don’t Know and its intimate follow-up, Got To Let It Go (Purpose), were licensed by HBO’s The Wire, UPN’s Kevin Hill, FX’s The Shield, and the WB’s Roswell. From various projects in more recent years, “Walkin’” has appeared on A&E’s The Glades, several songs in the film Big Words, “No Better Love” in the Nicole Kidman film Rabbit Hole, and her co-penned “Wanna Kiss U” for labelmate Monét on FOX’sThe Mindy Project. As a featured spokesperson, Johnson was also appearing in Japanese car commercials for Nissan. In 2004, Johnson briefly reunited with Cooly’s for Don’t Be Afraid-Get On (Purpose), which led to a featured spot in a 2005 national TV ad campaign for AT&T.

That same year Johnson and Cooly’s parted ways, opening the door to Johnson’s desire to be what is unfortunately an industry rarity: a songwriting female producer and performer. A Woman’s Touch, a single-producer compilation released in 2008 would touch yet another milestone in Johnson’s journey of stepping into her power. Featuring globally respected artists such as Maysa, Frank McComb, Eric Roberson, Rahsaan Patterson, Gordon Chambers, and Marlon Saunders, among others and nominated for the SoulTracks Readers’ Choice Award for “Independent Album of the Year,” A Woman’s Touch yielded the radio hit “Let Me Know (feat. Eric Roberson)” and earned global industry respect for Johnson as a songwriting producer. Or rather more respect, as Johnson has also penned hits for such artists as Conya Doss (“Emotions”), Seek (“Journey Into Day”), Laurnea (“No Shame”), Monét (“Wanna Kiss You”), Reel People (“Can’t Stop”), and Japanese R&B superstar Double, for whom Johnson landed a 2001 Top 10, gold-selling hit, “Angel.” Johnson also found her work appearing in several compilation projects, including the eighth, ninth, and tenth editions of Soul Lounge, including “In The Thick of It” with the Joey Negro & The Sunburst Band.

Now on her sixth solo release in 12 years, Johnson is taking another leap of faith, but this time it’s for no one but herself. Choosing to mine the spirit, energy, and deceptively simpler musicality of songs from the 1970s and ‘80s, the silver and bronze eras of the music she loves most, Johnson only tackles one cover, Teena Marie’s “Déjà vu,” here with the renown Onaje Allan Gumbs on grand piano. Throughout Naturally Me, the supremely talented trio of Lisala Beatty, Tiffany T’zelle Wilson, and Darius Booker vocally support Johnson’s confident foray into classic sounds with a modern, genre-blending approach that is strictly Angela Johnson. With the brightness of Diana Ross, the earthiness of Aretha Franklin, and the jazzy gospel doo wop of Natalie Cole, Johnson intimately sings about: keeping the home fires burning (“I Don’t Mind”), on not giving up on love (“He Saw Love In Me”), cleverly fighting to make ends meet (“I Promise [M.O.N.E.Y.],” featuring an incandescent Raul Midón on vocals and acoustic guitar), the need for a mental oasis from the daily grind (“A Beautiful Place”), and devastatingly about the Trayvon Martin case from a mother’s perspective (“Black Boy Lullaby”). Exploring the timeless sounds of artists like Prince and Steely Dan on “Say Yeah,” Johnson boldly writes about being fed up with America’s political and economic conditions and rallies a rousing call for community mobilization and a return to the earth for the natural foods we as a people once used to keep healthy in body and mind, a particular concern for the community-minded vegan. On the foot-stomping rock, soul and gospel hybrid jamboree, “Music Is My Religion,” Johnson instrumentally shares her expanded consciousness through her first spiritual language, the universal language of music. While others are writing radio songs damning love, our true believer goes in the opposite direction in a brassy, Motown-tinged ballad, “To Love Again,” whose protagonist refuses to accept anything other than the love she deserves and dares to still believe in. In a nod to her other true love, husband Russell, Johnson humorously writes about the gentlemanly, hands-off courtship he pursued to win her, in “Handz.” In truth, through her liberation, Johnson lyrically brings more of a tongue-in-cheek wit that rises up again and again throughout this declarative statement of Johnson as an artist and a woman, no longer worrying about who’s taking her seriously or not. She knows who she is and Naturally Me proves that Angela Johnson no longer has anything to prove to anyone ever again. In doing so, she also lets you know neither do you.