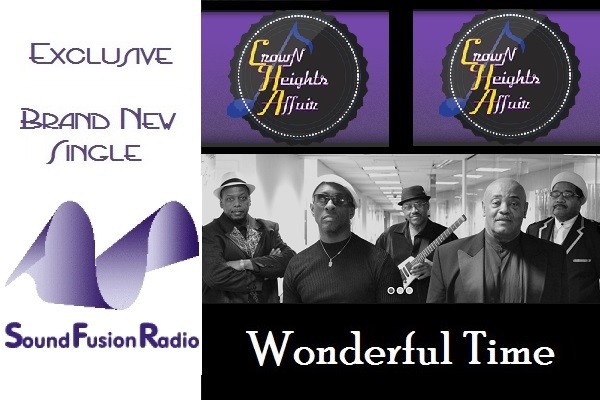 Are Proud To Announce

We feel so privileged and honoured!! The mighty CROWN HEIGHTS AFFAIR have chosen SOUNDFUSIONRADIO.NET to be the ONLY UK Station to exclusively have their BRAND NEW single WONDERFUL TIME to play on the day of its release tomorrow! Tune in to Breakfast 7-10AM BST EST AEST to hear it for the first time!

We maintain our appreciation for everyone for our collective success and we continue to be grateful for the contribution we ALL bring to keeping the Soul movement alive.

ARE PROUD TO ANNOUNCE

Named after the neighborhood in their native Brooklyn, Crown Heights Affair (C.H.A.), is a disco, funk and R&B fusion group formed in 1973. C.H.A was originally known as Ben Iverson and the Nue Dey Express which was collaboration between music industry professionals – Ben Iverson, Mark Lipetz , Donnie Linton and Britt Britton. It was the release of their self- titled debut album in 1973, under RCA records, that marked the band’s new moniker.
Throughout the years the group consisted of vocalist Phil Thomas, keyboardist Howard Young, vocalist/trumpeter James “Ajax” Baynard and Tyrone Cox, Vocalist/bassist Lorenzo “Muki” Wilson, vocalist/guitarist William “Bubba” Anderson, vocalist/percussionist Ray Rock, brothers- Bert Reid- Vocals/saxophonist (who died of lung cancer in 2004) and Raymond Reid- vocals/trombonist, and the newest member LA Blacksmith- vocals/saxophonist.

Crown Heights Affair was pioneers in the 1970s, revolutionizing the R&B/ funk approach to disco and dance music. The group gained recognition after Mark Lipetz landed a deal with De-Lite Records in 1975, which was home to Kool & the Gang. Under the management of Donnie Linton (who died in 2011 of gastric cancer), the song Dreaming a Dream was # 1 on the Billboard disco charts for thirteen weeks and climbed it’s way up to # 1 on the Hot Dance Club Play charts, as well. Other singles that attracted a worldwide audience were Every Beat of My Heart, Foxy Lady, Dancin’, You Gave Me Love, I’ll Do Anything, Galaxy of Love and Sure Shot.
The group has performed on American Bandstand , Soul Train, and Don Kirshner’s Rock Concert which included a lineup with Earth, Wind & Fire and Jay Leno as the up-and-coming comedian. In 1976 C.H.A. performed for the royal family of the Netherlands at The Hague. The band has also made multiple appearances at the world famous Apollo Theater in New York and the Royal Alpert Hall in London.

They have many hit recordings, by other artists to their credit, such as:
France Jolie- Gonna Get Over You, Taana Gardner- Heartbeat, Gwen McCrae – Funky Sensation, Unlimited Touch- Music in The Streets, Empress- Dyin’ to be Dancin’, Denroy Morgan – I’ll Do Anything For You, Amii Stewart- Knock on Wood and Jocelyn Brown – Somebody Else’s Guy.

Crown Heights Affair made their triumphant return to the concert stage in 2013 at BAM Cafe in Brooklyn, New York where fire marshals had to turn away almost 400 fans. The band says any additional artists/musicians and other performers will vary from show to show.

is a dynamic and charismatic performer who’s instrumental and vocal skills make his audiences “Groove, Hmmm, & Smile” at his musical prowess. . He is a gifted saxophonist, flutist & vocalist whose technique, emotional blend, & interpretation, fuel his musical odyssey. His versatility on Sax/Vocals caught the eye of Ben E. King, & Shirley Alston & The Shirelles whom he did a worldwide tour with…He sang his way into a tour with the The Drifters a few years later. As a scintillating Saxman he has been a member of the highly acclaimed “Brass Construction” and currently the “Crown Heights Affair” Funk/Dance Bands. C.H.A.’s recent performance at the B. A. M. Café has received rave reviews and delivered lines around the block waiting to see them..They also were featured @ the Casino in a sold-out Disco Inferno show..And most recently (June) returned from London after performing to a sold out audience @ the Coronet theatre.

Also lets not forget earlier this year L A was the M.D. for The Brooklyn Tonight Band @ The Barclay’s Ctr featuring (Boro Pres) Marty Markowitz’s Johnny Carson type show. L A has brought his special brand of electrifying funk and soul to Melba Moore, Me’Lisa Morgan, Freddie Jackson, Erykah Badu,Denice Williams, Isaac Hayes, & Ray, Goodman & Brown live concert performances. He is a graduate of the Center for Media Arts, and adds to his list of credits sound engineering for Whitney Houston, Kashif, Johnny Kemp, George Benson, & Najee. You can also find his sax and background vocals on the hit singles “I’ll do anything for you” – Denroy Morgan, “Somebody else’s Guy” -Jocelyn Brown, “Heartbeat”-Tanya Gardner, “Funky Sensation”- Gwen McRae & “Gonna get over you”-France Joli.

L A’s career can be viewed as a colorful journey in sound that totally embodies his Motto “I Come To Entertain You” He has successfully been the band leader for the “Blacksmith Organization”, the “L A Blacksmith Quartet” and the newly formed” L A BlackSmith & Jazz Plus”. His groups have played for numerous prestigious events and parties along the east coast including “Windows of the World”, and the “Rainbow Room”, “Barclay’s Center” to name a few. L A’s performances always engage his audience with his signature brand of R&B, Soul, Smooth & Straight ahead Jazz. It’s a hybrid style that infuses various genres and produces his very unique sound. “Spice & Flava” can best describe the show you’ll get when you see him live on stage.

L A is a renaissance man that continues to reinvent his persona and musical approaches. He’s a quintessential musician that is ever evolving, and ever growing.


I’m very proud that I can say: That I didn’t just know L.A. since the seventh grade, but we sat in band, and orchestra classes together. At that time, I always thought of him as: no less than top-notch. At this time today, I can honestly say; L.A. has grown lavishly in the musical world, and I believe, there’s more to come. Continue doing what you’re doing L.A., and may God continue to bless you. P.S, Drive on
Trooper! You’re truly a pioneer.