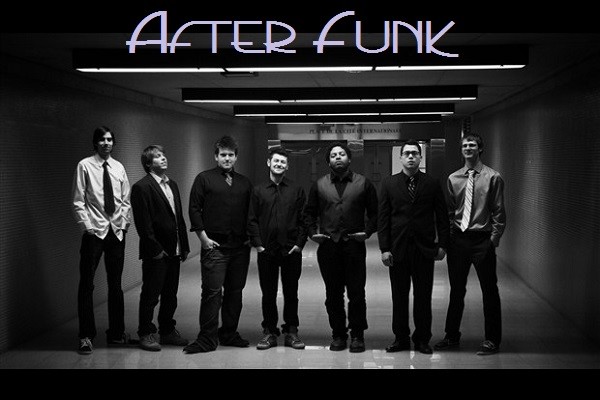 Since its humble beginnings as a four piece funk experiment in late 2011, After Funk has quickly grown into a powerful eight member modern jam-orchestra that will shake your heart in your chest and your butt on the dance floor.

Taking its cues from old school funk acts like Stevie Wonder and James Brown, modern jam bands like Lettuce and the String Cheese Incident with hints of the romantic classical music of Tchaikovsky and gospel music of Tye Tribbit, After Funk has found itself an ever growing audience of people searching for a heavy groove that expands their mind and fills their soul.

The band began in March of 2011 with founding members Justin Bontje (bass), Jaime Rosenberg (drums), Yanick Allwood (keys and lead vocals) and Brad McBurney (guitar). The goal was to win a local battle of the bands. They won. They entered another battle in another city, and won again. Shortly thereafter, with the encouragement of a small but very dedicated group of fans they released a 5 track demo entitled Soul’d, not even 8 months from the groups initial formation.

It was definitely time to bring the music to a wider audience. 2012 was a year of significant growth for After Funk, in more ways than one. In February, they added tenor sax, Julian Nalli and trumpet, while they were touring Soul’d around Ontario. 2012 culminated in a run of dates with with Juno Nominees Five Alarm Funk.

At the same time, the music was growing into its namesake – weaving in more complex rhythms and intricate chord progressions while remaining imminently accessible to any audience.  A second guitar player, Phil Tessis, and a percussionist, Jim M.F. Toner, were quickly added to the lineup.

After Funk came into it’s own in 2013. With the departure of the original trumpet player to another act and the addition of Brian Walters, the band was ready take flight. Relentlessly touring the first half of the year led to opening slots with some of their idols, 2013 Grammy nominated group Snarky Puppy and New Orleans funk sensation Dumpstaphunk.

2014 sees After Funk releasing a 7 track self titled EP that is the culmination of 3 years of hard work and musical growth for this young band.  They’re bringing it to cities across Ontario, Quebec and beyond playing with some even bigger and more exciting artists – check the “Tour Dates”for more info!

Pick up your free copy of After Funk at www.afterfunk.ca!