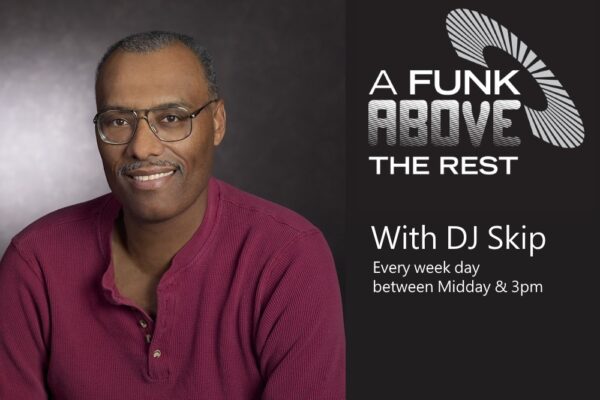 Every Weekday from Midday – 3pm

Biography:  I was actually born in Denver but lived everywhere due to my father being in the military. We lived in Germany for a good portion of my adolescence. I spoke fluent Dutch and loved living in the country! I have been a fan of music ever since my mother’s womb. I eventually became a professional drummer performing with many notable artists such as The Drifters, The Marvelettes, The Platters, The Coasters, Buddy Miles, and Alphonse Mouzon to name a few. My interest in radio was jump-started after a buddy of mine and I hosted a children’s reading show on Radio Disney. We did that for a year until Disney decided to shut down its radio network. While traveling on the road during my drumming days, I would really get bored listening to the radio because the stations sounded the same and played the same songs over and over again. I came up with an idea for a music radio format while traveling from gig to gig. I approached several commercial stations about giving my idea a chance. Both stations told me very respectfully there was no market or interest in the type of show I wanted to do. Of course, I knew they we’re out of touch and stuck in corporate thinking. I went to a public nonprofit station, they listened to my presentation, and allowed me to host my show A Funk Above The Rest. I began the show Jan of 2006 and was there till July 2012. The rest, as they say, is history. The Show has been a huge success! Its heard around the world on various digital networks. As I started to outgrow this particular station, I needed to go to another outlet that would let me expand on the ideas I had, so I resigned. I decided to pursue streaming digital networks to broadcast my show, which has now garnered a worldwide audience. So I now host on several stations. I have been with KGNU since July of 2012, hosting Dusty Grooves & Sleepless Nights! I now have my own media company that serves as a booking agency, concert/festival organizer, and promotions company. I also sub as a TV host for the TV Show “Funk Chronicles” filmed in Dayton OH.

My wife and I are volunteers in the Deaf Community. We know ASL (American Sign Language) and truly enjoy the work!

On my shows, you can expect to hear old funk, new funk, and everything in between the funk!


Have you heard my funk?


Nice to meet you. I like SOUL and FUNK, and I listen to this radio from Japan. Is it possible to request the song I want to play on the program?
I would like to request a FUNK band called ENDRECHERI from Japan.